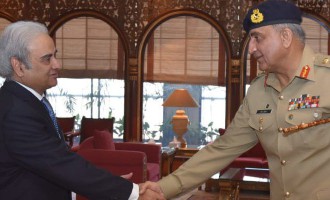 A statement issued from the PM Office said that Gen Bajwa congratulated PM Mulk on assuming the office of prime minister. It added that COAS and the caretaker prime minister discussed “matters pertaining to Pakistan Army” during their meeting.

Former chief justice Nasirul Mulk took oath as Pakistan’s seventh caretaker prime minister last week, one day after the National Assembly was formally dissolved in the lead up to the elections.

President Mamnoon Hussain had administered the oath to Mulk, who was unanimously nominated for the post by both the government and opposition. Former PM Shahid Khaqan Abbasi said that the retired judge was a neutral persons whom “no one could object to.