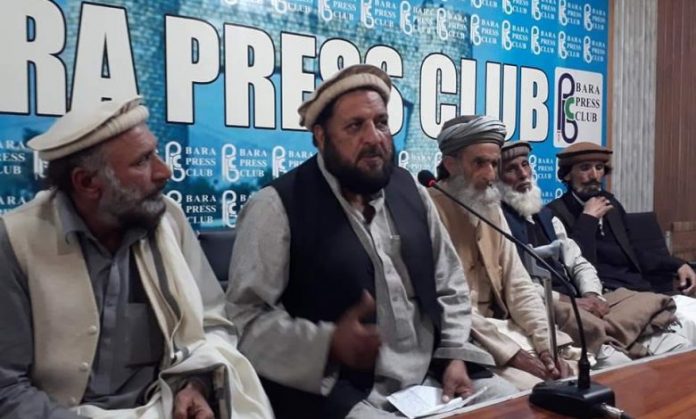 LANDIKOTAL: The elders of Bar Kambarkhel area of Khyber tribal district have called upon the concerned authorities to change the standard operating procedures (SOPs) at the cash distribution centres of Sada-e-Amn program as they cannot tolerate violation of local traditions anymore.

Tribal elders Haji Muhammad Afridi, Sher Bahadur Afridi, Musa Khan Afridi, Miramshah Afridi and others said at a press conference at Bara Press Club on Tuesday that the case assistance under Sada-e-Amn program must be handed over to men rather than women. They expressed strong reservations over the current procedure and termed it against Islamic teachings and Pakhtun culture. They said cash assistance must be dispatched to the homes of deserving women on the pattern of polio vaccination program.

The speakers said hundreds of women and children daily come to the office of Sada-e-Amn in Landikotal and do not follow the coronavirus SOPs, which is a dangerous trend.

After the protest, the office was closed temporarily. The protesters also demanded that the Sada-e-Amn office must pay money to male members of family instead of females to avoid complications. They said they are not against Sada-e-Amn program, but actually they are against the mode of payment. They said women have parda issue at the payment centre which is intolerable under the tribal traditions. They said tribal traditions will be protected. They said the office must function at a suitable location where it could carry out its functions smoothly.