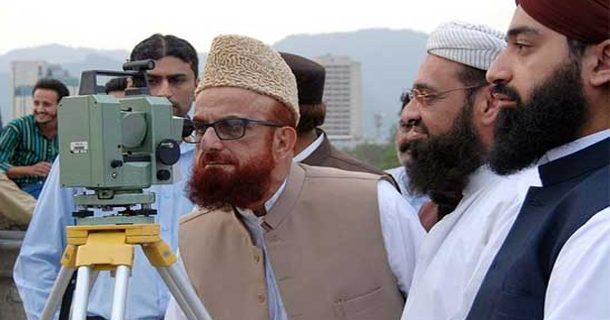 PESHAWAR: The Central Ruet-e-Hilal Committee will make announcement about sighting of the Eidul Fitr moon for which a meeting of the committee has been called in Karachi on June 4.

According to a statement of the Ministry of Religious Affairs and Interfaith Harmony, the announcement about the Shawal moon-sighting will be made by the Central Ruet-e-Hilal Committee. Mufti Munibur Rehman will chair the meeting of the Hilal Committee.

The letter says the experts have prepared a five-year lunar calendar under the instructions of Minister for Science and Technology Fawad Chaudhry. It has sought option of the CII on the issue within five days. It says if the CII considers it appropriate, then it can also call a meeting of Ulema and scientists to take their input over the issue.

According to the lunar calendar prepared under the instructions of Fawad Chaudhry, Eid moon is likely to be sighted on June 4 and Eid is likely to happen on June 5.

The holy month of Ramazan begin in Saudi Arabia and gulf countries on May 6 and many people in Khyber Pakhtunkhwa follow that calendar. The local moon-sighting committee of Peshawar headed by Mufti Shahabuddin Populzai also announced first Ramazan on May 6 and many Pakhtuns also follow his announcement. Therefore, the moon-sighting of the Peshawar committee of Masjid Qasim Ali Khan is likely to meet on June 3 and if it got enough evidences then it may announce Eidul Fitr on June 4. There are also chances that Eid will be observed in Saudi Arabia and other countries following its calendar on June 4. In that scenario, there are strong chances that two Eids will be observed in Pakistan on June 4 and June 5 by followers of different calendars. There are also slight chances of Eid on the same day in the whole Pakistan if both the local and official committees announce Eid on June 5.