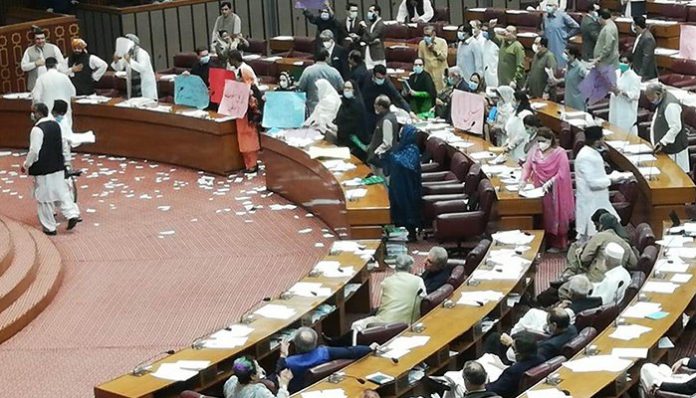 PESHAWAR: It was among the top trends on social media when Special Assistant to Punjab Chief Minister Dr Firdous Ashiq Awan slapped the PPP MNA Qadir Khan Mandokhel on a talk show. And then on Tuesday, such a hullabaloo happened in the National Assembly which had never happened in the history of the country earlier.

Our tolerance level has stooped to such a low level that even our elected representatives are jumping to the throat of their colleagues. A society with intolerance can never develop. We elect our representatives for legislation in the Parliament, but instead of serving the masses, our lawmakers are indulging in personal fights without paying any heed to people’s problems, for which they have been elected.

Opposition Leader in National Assembly Shahbaz Sharif was making speech on budget on Tuesday when the treasury members started noise which also annoyed the opposition members and then a fight ensued. The Parliament House soon presented a look of fish market and members from both sides tore the copies of the budget and threw it on each other. The members also used abusive language against each other, it was filmed by some members, and its clips went viral on the social media within no time.

The members violated the sanctity of the House brazenly and no sign of remorse was seen from any side as they repeated the same practice in the House the next day. These are the same members who come to the houses of common citizens with promises to do everything for their welfare after election, but once they get elected, they forget public service and indulge in personal agendas.

The PTI came into power with the slogan of change, but change only happened for the worse in shape of worse price hike, while the coronavirus pandemic made the matters even worse. Lawmakers are elected for serving the masses, not inciting them to toe their line and indulge in verbal fights with those who are opposed to their political ideology.

The slogan of change is right, but this change must be brought in thinking and attitude and good governance, not through hooliganism in the legislature.