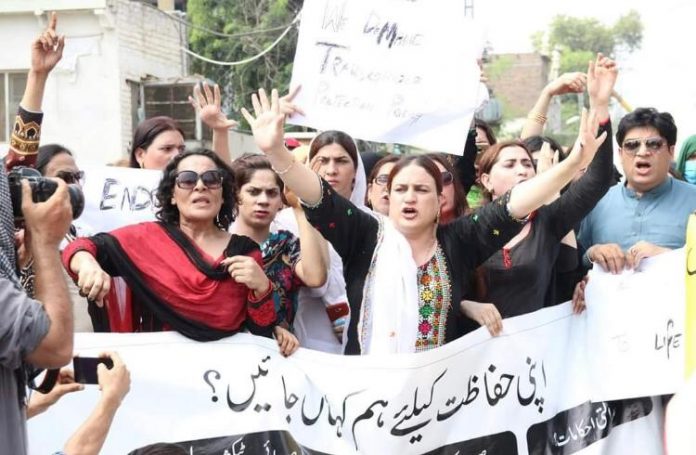 PESHAWAR: Transgender community on Tuesday said that Charsadda police have refused to provide security to their birthday party celebration despite the permission granted by the deputy commissioner.

They accused the District Police Officer (DPO) to have failed to implement ‘the Protection of Transgenders Rights act 2018’. Transgender persons were addressing a press conference at Charsadda Press Club.

The general secretary of the TransAction Arzu Khan said during the press conference the DPO has refused to accept their rights protection act. Arzu said that despite the permission granted by the deputy commissioner, the transgender community was not allowed to celebrate the birthday of one of their member.

“The police station was demanding Rs 25000 to provide protection to the participants of the birthday party,” alleged Arzu Khan. “But the transgender community have adopted a legal way and refused to provide any bribe.”

They demanded the newly appointed inspector general of Police to arrange training facilities for the police and equip them with the prevalent laws of the country. Transgenders accused the police that so far they have made false promises of providing protection unprivileged communities of the province.

Arzu said that KP police have constituted a committee on the protection of the transgender persons in the province, but unfortunately not even a single meeting of the committee has so far held.  Arzu alleged that Qazi Jamil ur Rahman, Capital City Police Officer (CCPO) has promised that a committee will be formed to investigate the reasons behind the violence against transgender persons, however, he has not fulfiled his promise.

Taimur Kamal, Coordinator of Khyber Pakhtunkhwa civil societies network said the press conference that he has contacted the DPO Irfan Ullah regarding the birthday party but he has refused to provide security personals. “He is under the influence of Jamiat-e-Ulema Islam and Jamaat-e-Islami leadership in the district,” alleged Taimur Kamal.

Kamal added that high court, Supreme Court and KP government has several times issued directives for efforts to ensure transgender their rights, the police have never implemented it.  The transgender persons demanded the Supreme Court and human rights commission of Pakistan to take notice of their rights violations. They warned that if KP IGP failed to take any action Charsadda police, they will lodge a writ petition against the police in High Court.