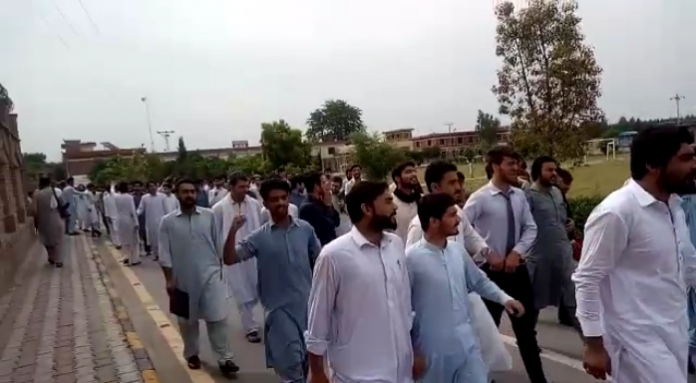 CHARSADDA: The students of Bacha Khan University Charsadda on Friday staged protest demonstration against increase of fee by the university administration.

The students gathered in the campus and staged protest against what they termed cruel increase in the fees. They announced to boycott the university exam which was scheduled to start from Friday. The protesting students also chanted slogans against the university administration.

The students said the university administration has increased the fee of geophysics from Rs1,500 to Rs9,000, while the fee of summer classes has been increased from Rs2,000 to Rs10,000. They said the administration also received thousands of rupees from the students in the name of tourism and sports, but no tour or sports gala takes place in reality.

A student leader said very few students in the university come from the well-off background, while the majority come from families who don’t have much financial resources. He said there are many students in the university who arrange money for their studies by tuitions in the evening as their families cannot support them. He said the fee increase by such a high proportion is a huge injustice with such students. He said this university belongs to the poor, and should stay as such.

The students said the university administration must stop the step-motherly attitude with the students and facilitate them in their studies. They said they would lock the university gates if their demands of reversal of the fee increase were not accepted.

After suspension of both Patwaris, departmental action has been imitated against them. The deputy commissioner office said both the Patwaris were putting impediments in the process of computerisation of land record. Both of them were issued several warnings to submit their records, but they didn’t comply.