PESHAWAR: In the absence of proper legislation to curb child marriage in Khyber Pakhtunkhwa (KP), 15 percent of child brides give birth to babies before reaching 18 years of age- the highest rate of underage mothers across Pakistan.

According to Pakistan Demographic and Health Survey, situation for children is also worse in erstwhile FATA and Baluchistan where underage mothers ratio stand at 13 percent and 12 percent respectively.

The conservative tribal and Pashtun customs perpetuate child marriage in the northwest and south west of the country.

The KP Women Rights Commission estimates 74 percent girls are married by 18 in the province against the 21 percent underage marriage reported by UNICEF across Pakistan.

Under this act, enacted by the then British regime, the punishment for underage marriage is Rs 1000 and one month jail which is not enough to stop the practice, says Qamar Nasim of Blue Veins, a non-profit organization working for gender equality child and women rights in KP. 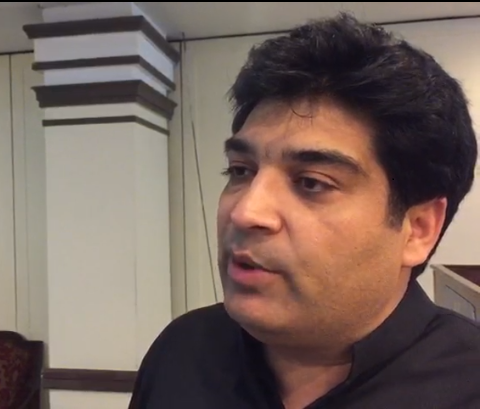 Qamar Nasim talking to TNN.During an interview with Tribal News Network on the sideline of a consultation workshop ‘Girls not Brides’ in Islamabad, he says that the province of Punjab and Sindh have made legislation for the prevention of child marriage whereas KP and Baluchistan are following the ineffective 1929 Act which needs to be abolished and replaced with new legislation.

“When a girl is forced to marry as a child, she faces immediate and lifelong consequences. Her odds of finishing school decrease while her odds of being abused by her husband and suffering complications during pregnancy increase. There are also huge societal consequences, and higher risk of intergenerational cycles of poverty,” said Anju Malhotra, UNICEF’s Principal Gender Advisor while commenting on a report of global practices of child marriage issued by UNICEF in March this year. “Given the life-altering impact child marriage has on a young girl’s life, any reduction is welcome news, but we’ve got a long way to go.”

In Pakistan the legal marriage age for boys is 18 while for girls it is fixed at 16. Qamar Nasim says that many girls in Pakistan are married at the age of 9, 12 and 14 but they are shown by theoir parents as 16 at the time of marriage to avoid legal action. “It is hard to ascertain the age of a girl at the time of her marriage in absence of Computerized National Identity Card (CNIC) which is issued to men and women when they reach the age of 18.Since 18 years is marriageable age for male, then why not it should be the age for female”, he raised the question but at the same breath advised the government to make it abiding on brides and grooms to hold  CNIC before entering into a marriage which will help discourage child marriages.

“Each and every child marriage prevented gives another girl the chance to fulfill her potential,” said Malhotra. “But given the world has pledged to end child marriage by 2030, we’re going to have to collectively redouble efforts to prevent millions of girls from having their childhoods stolen through this devastating practice.”

Valerie Khan Yousafzai, the Excetive Director of Group Development Pakistan, told TNN that though the issue of child marriages is so prevalent in Pakistan, the people are slowly and gradually accepting the fact that early age marriages are detrimental to the health and education of underage girls and boys.

“In presence of KP child protect and welfare Act which talks about the rights of children, we need to work collectively for curbing of child marriages”, she said and added that fortunately the issue of malnutrition and improving maternal health care is one of the top priorities of the government which is not possible to achieve without addressing the issue of child marriage.

“We have made a plan to coordinate with civil society organizations, Islamic Ideology Council, elected representatives and law enforcement agencies for bringing an end to the menace of underage marriages” she remarked.