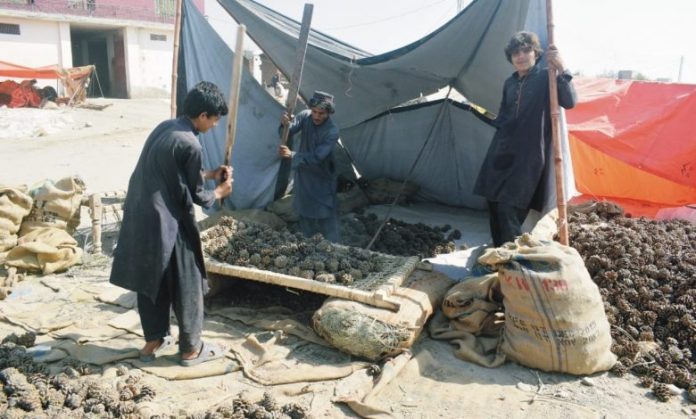 BANNU: At a time when the prices of edibles and other household items have recorded a considerable increase, the prices of pine nuts or chilghoza, as it is locally called, dropped significantly during the coronavirus lockdown.

The travel restrictions imposed in many countries may be one of the reasons for the low prices of the otherwise exceedingly high priced nuts in Pakistan as the pandemic barred the traders from exporting it.

Ali Khan, a dry fruit dealer in Azad Mandi Bannu, says that the coronavirus pandemic severely affected the chilghoza trade as harsh travel restrictions hindered its export. Khan informs that most of the pine nuts produced in Pakistan are exported to China, UK, the US, Europe and other Middle Eastern countries.

“I am not the only trader who suffered losses. Everyone involved in the chilghoza business suffered financially.

Noorullah, another trader in Azad Mandi, says that before the lockdown, most of the traders had purchased the stock from the farmers at higher prices because they were anticipating a good profit. However, he adds, the traders couldn’t transport the supply of the pine nuts to the markets due to the lockdown.

“Those who managed to transport the consignment to the markets a bit earlier, faced little losses while others who failed to deliver the stock suffered huge financial losses as the prices were dropped considerably,” he informs.

Noorullah has his pine nuts cave in the Shawal area of North Waziristan tribal district. He adds that the travel restrictions and lockdown imposed by the district administration also created hurdles for him while transporting the stock to Bannu.

Kamran, a commoner from North Waziristan is happy that the prices of chilghoza have dropped. “Last year, the per kilogram price of chilghoza was Rs8000 and it was beyond our reach. Fortunately, the price has fallen significantly and it is fluctuating between Rs1500 and Rs2000 per kilogram. It is good for the middle-class people that they can afford to buy it,” he says.

He further says that the prices of chilghoza will further drop once the Ghulam Khan border is permanently opened and chilghoza produced in Afghanistan reaches the Pakistani markets.

The decline in the prices of chilghoza has also boosted its sale in the local markets. Malali, who runs a dry fruit shop in the Pakistan market says he didn’t put up chilghoza for sale in the past few years as people couldn’t afford to buy it due to its inflated prices. “Now I have procured the stock as the prices have fallen and people are easily purchasing it,” he concludes.