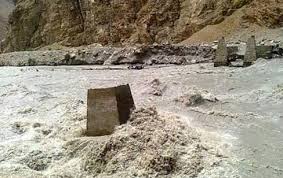 PESHAWAR, 25 July: Death toll in the Chitral flooding has soared to 35, as another 30 people were swept away in certain areas of Mastuj Division today morning.

Water torrents hit certain areas of Mastuj Division, washing away 30 people, including women and children in addition to a number of houses. Bodies of 15 persons have been fished out while search for the reaming bodies is on.

Provincial Disaster Management Authority (PDMA) put the number of fully-damaged houses at over 300 while 72 houses were partially damaged owing to the flashfloods in Chitral. In addition, 150 shops and 40 bridges were also destroyed.

Meanwhile, Khyber Pakhtunkwha Minister for Information Mushtaq Ghani said that 40 tons of food items and 400 tents have been dispatched to Chitral. The provincial government has also requested the federal government to provide them with helicopters for rescue work. The provincial minister said that the floods inflicted over a billion of rupees loss to the residents of Chitral.