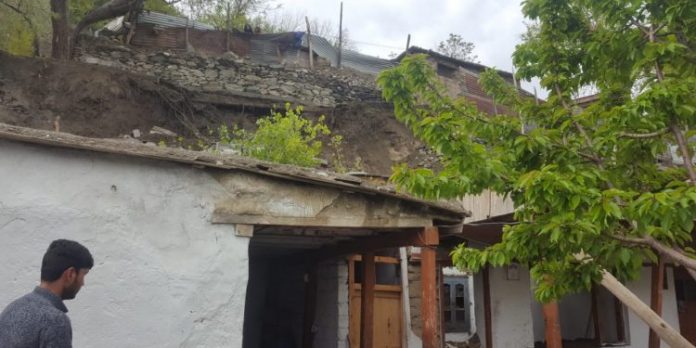 CHITRAL: In a tragic incident three persons – including a woman – were killed when a house came under landslide here in Danin area of the district on Monday morning.

The Rescue officials said that the incident occurred at 5:45 am when the house of Salim Khan, situated in a populated area was hit by an avalanche trapping the family under the rocks.

Three persons, identified as Tanvir Khan Son of Qurban Khan and his mother and Wasim Khan son Shakur Khan died on the spot, the rescue 1122 men said. The rescue team have shifted the dead bodies to the district headquarter hospital, where after some necessary medico-legal procedure; they were handed over to their families.

The local sources said that 35-year-old Tanvir and his mother were the residents of Baroz village and were the relative of Salim Khan. They were staying at the house as guests on the occasion of the newborn in the family.

After the tragedy, local people gathered to rescue them from the debris however, despite hard efforts, they couldn’t make any success. The rescue 1122 emergency service of the KP has also informed that immediately after they get the information, they rushed to spot.

HANGU: In another tragic incident, three members of a family were injured when the roof of their house caved in here in Mardu Khel Banda area of the district on Monday. The rescue men said that the tragedy occurred after a heavy spell of rains in the area which has affected the mud-made structure of the house.

The official informed that those died in the tragedy included a man, his wife, and their four-year-old son.  The local people rushed to the spot and retrieved all the three family members from the debris. The locals and policemen have shifted the injured to district headquarter hospital.