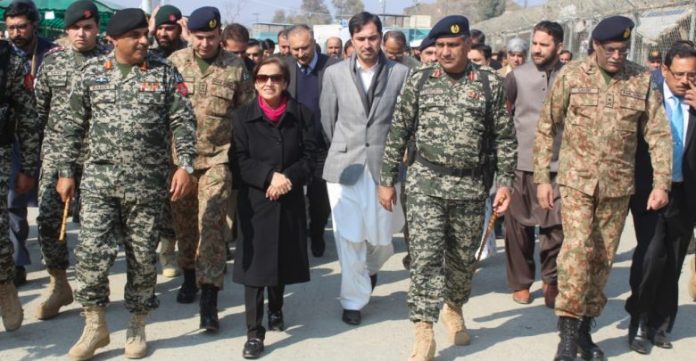 PESHAWAR: After Prime Minister Imran Khan’s directions to concerned officials to take measures to keep the Pak-Afghan Torkham border round the clock, the civil and military officials on Saturday visited the border to review arrangements and facilities.

The officials arrived at Landikotal cantonment through helicopters where they were received by the Commandant Khyber Rifle Col Farrukh Humayun. Strict security measures were taken during the visit of the officials to the border.

The Task Force members visited Torkham gate and pedestrians’ terminal and reviewed arrangements for the people crossing the border. They also examined the immigration process and scanner machine in import terminal where they were briefed by the officials about the whole process by Inspector General Frontier Corps Major General Rahat Naseem.

The Task Force members also reviewed progress on the installation of fencing on the Pak-Afghan border and expressed satisfaction over the ongoing work. The officials also visited the Passport and Nadra offices and export and import terminals at the Torkham border.

Prime Minister Imran Khan on 29 January had directed the concerned authorities to take steps to keep Torkham border open round the clock to promote trade activities. He had directed the officials to ensure implementation of the directives within six months.