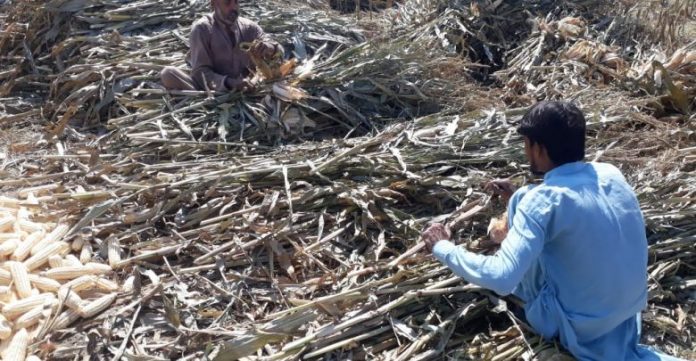 SWABI: Recent rains and hailstorms in Swabi have damaged the standing crops, particularly the maize crops, due to which the farmers suffered huge damages.

Tariq is one such farmer who is highly perturbed over damage to his crops due to weather conditions. Hailing from Ghalama area, Tariq said while talking to TNN that rain and hailstorm damaged his maize crop and vegetables in the fields. He said maize is available in the market at Rs1,200 per maund, while fertiliser bag costs Rs3,000. He said he is pondering whether he should quit farming after his hard work was spoiled due to uncertain weather conditions.

Tariq grows maize, pea, water melon and other vegetables in his fields, but he could not earn enough according to his labour and other efforts due to enormously increased cost of agricultural products, pesticides and seed, and low profit in the vegetable and fruit market for farmers.

Another local farmer, Sher Bacha, told TNN that he suffered loses as his fields were damaged by hailstorm. He said the sufferings of farmers can be reduced by the government by reducing the prices of pesticides, seed and fertilisers.

“Agriculture Department had announced to provide mustard seed to farmers of Swabi. We have filled the forms and waiting for the response of authorities. If we get the seed free of cost and then we get good crop then our sufferings can reduce considerably,” he said.

He said the wheat sowing season is also around the corner and if the government provides free of cost wheat seed then it will greatly benefit the farmers of Swabi.

Agriculture Department Field Assistant Muhammad Naeem said farmers are facing a lot of difficulties due to abrupt changes in weather conditions. He said rains are not happening on time and hailstorms are also damaging standing crops. He advised the farmers of Swabi to sow crops according to the climate patterns of the region.

“Farmers should visit the Agriculture Department office before sowing season to get advice on the best suitable crops according to the local climate patterns,” he told TNN.

Muhammad Naeem said he is well aware of the damages suffered by farmers and he has recommended concession with farmers in prices of pesticides and seed.

Dilbar Shah, a local citizen, said he quit farming is it is not profitable anymore. He said he earns more by selling fruit in the market. He said the Agriculture Department should provide quality seed and pesticides to farmers on subsidised rates to enable them to produce good crops.