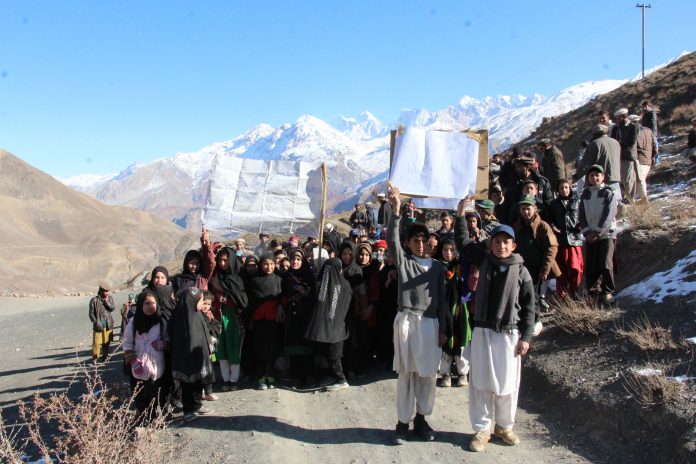 CHITRAL: Around two dozens children on snow-caped mountains of Chitral staged a protest against water shortage and appealed to the Chief Justice of Pakistan to take notice of the issue.

The children of various schools in Upper Chitral were holding banners and placrds inscribed with demands for construction of irrigation channels, safe drinking water schemes and afforestation to control climate change in the valley.

The protesting children said their parents have no source of income to feed families let alone bearing their schools’ expenses. “They would do farming and sell dry fruits but due to climate change, they have lost thier livelihood,” the students said, adding that all springs have gone dry and agricultural lands barren in Upper Chitral.

They protesting students appealed to the Prime Minister Imran Khan to allocate funds for construction of irrigation and drinkinh water channels in thier respective villages.

Local elders said that Chief Justice Saqib Nisar, during his visit to the district, assured them that he would ask authority concerned to resolve the issue of water shortage.But nothing has happened as yet, they complained.

“We are sitting on water source with a flowing river,” said Sherullah and urged the government to install pumps and piplineas on the river and construct solar tube-wells to ensure uninteruppt water supply to them and their crops.

The area has 3000 population who would grow crops on 40,000 acre of land that has become barren due to shortage of water. Around 85 families have shifted to Lower Chitral due to water shortage while the remaining families are also weighing options to migrate.

Around 200 families have also migrated from Morilusht area to Chitral City due to looming water crises. Chitral is the worst-affected district of climate change where people are facing severe water shortage despite the fact that Chitral is home to dozens of glaciers, natural streams and a river.