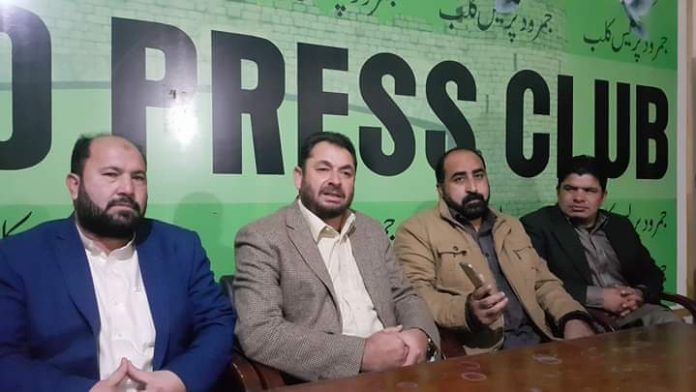 JAMRUD: The Pakistan Tehreek-e-Insaf (PTI) Member National Assembly from Khyber Agency Iqbal Afridi has termed the closure of coalmines in the area of Kalakhel tribe illegal.

Addressing a press conference at Jamrud Press Club on Tuesday, Iqbal Afridi said hundreds of coalmine workers have lost their jobs with the closure of the coalmines which is unacceptable and unjust. The lawmaker from NA-44 said he and his party stand with the Kalakhel tribe on this issue. He said the PTI has come into power with the slogan of eliminating corruption, therefore, it will not tolerate any kind of corruption and corrupt practices.

Iqbal Afridi said the merger of tribal areas with Khyber Pakhtunkhwa is being carried out according to the will of the area people. He said completion of the merger process is among the top priorities of the PTI government. He said the tribal people were living under the black law of Frontier Crimes Regulation (FCR), but now that dark era has come to an end and people of the tribal districts will have all the rights which are enjoyed by the people of the rest of the country. He said the Pakistani Constitution and laws will apply to the tribal districts now and the people will get speedy and inexpensive justice and all other facilities.

The MNA said development process in the tribal districts will gather momentum after these areas get their due share in the National Finance Commission (NFC) Award. The PTI leader announced that khuli kutcheri (open court) will be organised in Ali Masjid, Lala Cheena and Toda Meena on Saturday and Sunday where people will be invited to voice their grievances and share their problems. He assured that he will try his level best to resolve all genuine problems of the people at the earliest.

The members of Kalakhel tribe last week held a protest demonstration against closure of coalmines in the area.

The protesting tribesmen said Kalakhel tribe is extracting coal from the mines for the last nine years under the lease obtained from the erstwhile Fata Development Authority. However, they said, instead of facilitating the coalmine workers and helping in improving safety measures, the administration has made the lives of coalmine workers difficult by taking adverse measures.

The elders of Kalakhel tribe demanded the government to resolve the matter amicably. They warned that they will hold protest in Islamabad if the coalmines were not opened.