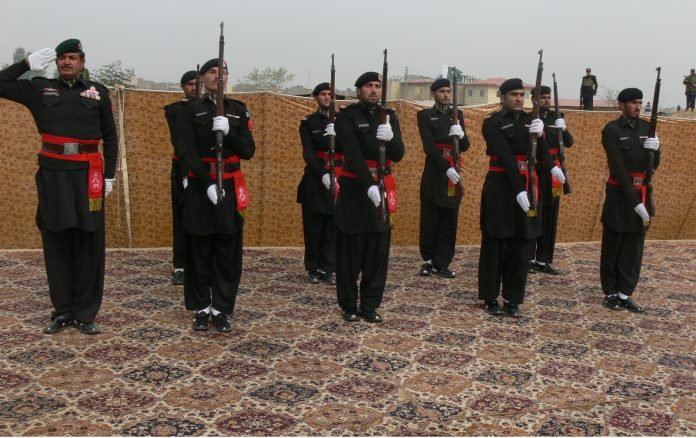 PESHAWAR: Chief Minister Khyber Pakhtunkhwa Mehmood Khan has directed relevant officials to formulate rules and regulations for the merger of Khasadars and levies forces with the KP Police within one month.

The directions were issued on Wednesday during a briefing to chief minister regarding the process of merging of paramilitary forces with KP Police. The Chief Minister directed from August 1 Khasadars and levies men will be provided with salaries and other privileges at par with the Khyber Pakhtunkhwa police.

The chief minister was informed that all the vacant posts in Levies and Khasadars forces will be filled by the KP police department and the KP police will be responsible for all its financial as well as administrative affairs.

The CM was informed that all the men of Khasadar and levies forces will be merged with the KP police according to their respective ranks and there will be no drop in their status and ranks. To give formal shape to the rules and regulations under the khasadars and levies forces act of the KP government, the standing committee will present its report within one month.

On April 8, The Chief Minister has announced the immediate merger of the Levies and Khasadar forces with the KP Police, during a press conference. The CM has said that 28,000 personnel of both forces would benefit from this merger.

Khan further said that the additional training will be given to the Khasadar force to maintain law and order situation. He lauded the countless sacrifices of both the forces in the war against terrorism. He provided assurance that no will be rendered jobless and that all reservations would be addressed.

Referring to the development process in tribal areas, Mahmood Khan said that a ten-year development plan for the tribal districts will be implemented according to the vision of Prime Minister Imran Khan.