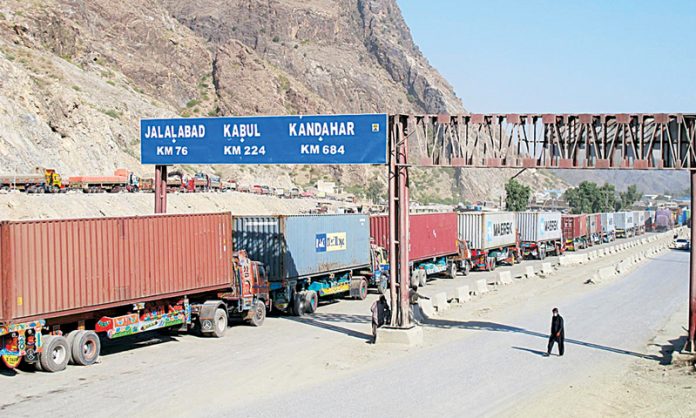 PESHAWAR: Chief Minister Khyber Pakhtunkhwa Mahmood Khan has directed to expand the volume of trade with Afghanistan. He directed that there must be no restriction on Torkham border as for as the transportation of goods are concerned.

He expressed the hope that with these measures the export including the wheat to Afghanistan will be increased.

The meeting focused on the easing of vehicular traffic, the raising of additional staff of custom and FIA adding that the government would cooperate to the maximum for the boost of trade. He would take the Prime Minister on board for round the clock opening of Torkham border for trade related activities.

Addressing another meeting the Mahmood Khan said that the new proposed local government model for Khyber Pakhtunkhwa would be a unique one, decentralizing the power and authority and would have more participatory approach that would improve the decision making process and efficient services delivery. This model would remove the sense of deprivation of the people which would be brought to the provincial assembly for enactment. He said this model would also be extended to the newly merged districts as well adding that he would meet the Prime Minister about the introduction of the new local government system in the province. The provincial government would reduce its power transferring it to the elected representatives at the local level. However, the Peshawar Metropolitan city government would stay. He said the new system would bring more transparency and efficiency to the delivery.

Addressing another meeting on the Gomal Zam Dam project at South Waziristan district, the Chief Minister enumerated a number of steps for its early completion. The meeting was briefed about the 17.4-megawatt electricity to be produced by Gomal Zam Dam and the electricity produced thus would be extended to the grid stations of Tank and Wana. This would also bring under cultivation hundreds of thousands of acre of land of Tank, DI Khan, Kulachi and would improve the overall economy of the province. This project would have a canal which would be completed on June adding that he would contact the federal agencies to ensure its early completion. The Advisor to Prime Minister Arbab Shehzad assured the provincial government all-out support for early completion of this project.