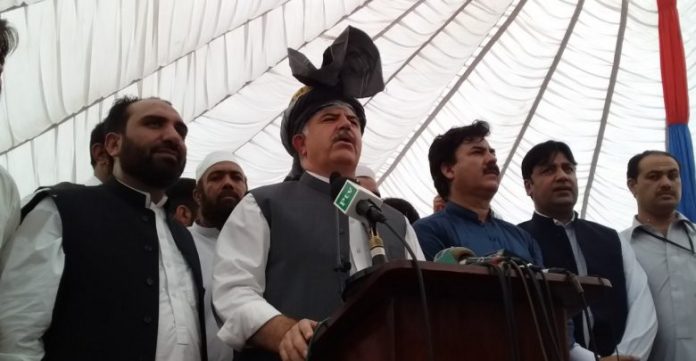 The chief minister said during his address at the inauguration ceremony at Captain Roohullah Shaheed Sports Stadium that electricity to Mohmand industrial estate will be provided from the grid station. He said two 52-KV transformers have been installed in the grid station. He said the project will be completed with a cost of Rs467.273 million and it will help in developing marble industry of Mohmand district.

The chief minister said work on the project was launched in 2007 which has been completed now. He said that after increased production at Mohmand Marble Industrial Zone, marble will also be exported to Afghanistan.

The chief minister said the Pakistan Tehreek-e-Insaf (PTI) could not win many seats in the elections of tribal districts due to lack of proper campaigning. He said he loves the people of merged districts that is why he regularly pays visits to the area. He said a special seat for women in KP Assembly has been given to a woman from Mohmand district who will work for development of the area.

Mehmood Khan said industrial zones will be established in all the tribal districts. On the occasion, he also announced upgradation of Headquarters Hospital Ghallanai, provision of Rs1 million grant for Mohmand Press Club and establishment of media colony for local journalists.

The chief minister said Rs100 billion has been allocated for development of tribal districts in the budget. He said that keeping in view the water shortage issue in Mohmand, a project for water supply from Kabul River will be initiated with a cost of Rs1 billion. He said the government will also construct small dams in tribal districts and give jobs to local people in Mohmand dam project.