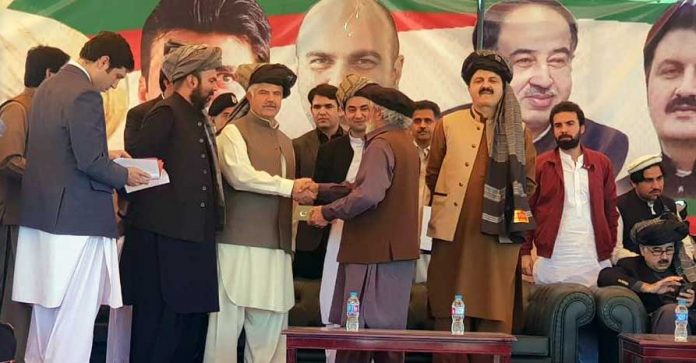 MIRANSHAH: Khyber Pakhtunkhwa Chief Minster Mahmood Khan said on Saturday that all the tribes are Pakhtuns and all Pakhtuns are tribesmen and not alien to each other.

Addressing a public gathering in Miranshah during his visit to North Waziristan tribal district, the chief minister said it is a matter of great honour for him to address the people in Miranshah. He said some people are trying to block the way of the government representatives coming to the tribal districts.

“We are also Pakhtuns and no one can stop us from meeting our brother in the tribal districts. People indulging in such practices are misrepresenting the Pakhtuna,” the chief minister said while referring to protest by anti-merger people against his visit to the tribal district.

He explained that Pakhtuns, not someone else, is ruling KP and there should be no misunderstanding or misconception about that. He said Prime Minister Imran Khan also had family link with Pakhtuns and he is committed to resolve their problems. He said it was Imran Khan who raised his voice against drone attack and operations in the tribal districts.

“Now we need to move faster towards development initiatives. With the Grace of Almighty Allah, I can assure you that provincial funds will be spend in the tribal districts, Mehmood Khan said.

The chief minister made it clear that he will not tolerate corruption. Without naming the Awami National Party (ANP), he said corruption was rampant during the tenner of those who previously ruled the province in the name of Pakhtuns.

“Now some more people have emerged who are raising slogans in the name of Pakhtuns,” the chief minister said in an apparat reference to Pakhtun Tahaffuz Movement. He asked the tribesmen to beware of such elements and don’t let them misuse the Pakthun card.

He said 3G and 4G internet service is being inaugurated in Miranshah and he will come again for distribution of Sehat Insaf Cards and opening of Cadet College and Medical College.

The CM also mentioned that Levies and Khassadars will be brought under the provincial administrative system. He said solar panels will be installed in schools, hospitals and mosques to overcome the problem of power outages.

Mahmood Khan announced declaring Razmak a tourist resort which will improve the socio-economic condition of the area. He also announced construction of 54-kilometer Shewa-Speen Wam Road.