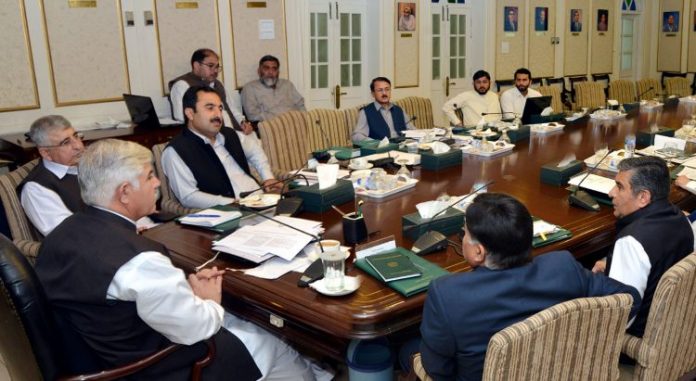 PESHAWAR: Chief Minister Khyber Pakhtunkhwa (KP) Mehmood Khan on Thursday has issued orders for action against those spreading baseless rumours about dengue virus in the province.

Presiding over a special meeting on the prevention of dengue fever across the province, Chief Minister Mahmood Khan directed that emergency effort for a permanent solution to the problem. Chief Minister directed to ensure the recruitment of entomologists on an emergency basis while all relevant departments were ordered to play an active role in overcoming the problem.

Earlier, the Chief Minister was given a detailed briefing on dengue cases across the Khyber Pakhtunkhwa. It was reported that so far 1889 cases were reported from across the province, out of which 891 dengue virus cases had been confirmed. The Peshawar district is the most dengue affected region in the province with more 499 cases reported from there. “Private laboratories are spreading panic among the public for profit,” Chief Minister was informed during the briefing.

The Chief Minister was informed that NS-1 confirmation in the blood does not indicate the presence of dengue virus. The health officials told the CM that special cells have been set up in government hospitals for the diagnosis of dengue virus in patients. On this occasion, the Chief Minister ordered that action should be taken against those spreading baseless rumours regarding dengue virus while all the relevant departments took control of the issue.

On September 2, the first case of dengue virus was reported from Bara district of Khyber district, where a young man named Jahanzeb, 30, was diagnosed with the dengue virus. Swabi received reports of four people being infected the next day, while hundreds of people are reported to be infected by the dengue virus. Last year alone, more than 60 people in Khyber Pakhtunkhwa (KP) died of the deadly dengue disease.