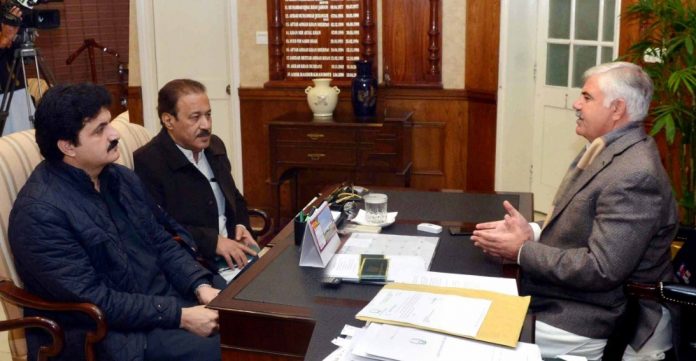 PESHAWAR: Chief Minister Khyber Pakhtunkhwa Mahmood Khan has said that he will soon visit Waziristan to announce some major projects including the launch 3G and 4G internet facilities. The CM added that he will meet members of the advisory committee to get their recommendations and make decisions that benefit the people of tribal districts.

He said this while after Ajmal Wazir, his adviser on tribal area briefed him about progress on reforms process. CM said he was fully aware of the hardships and sufferings of the tribal people and would keep on moving to resolve these problems gradually.

Mahmood Khan said the government stands committed to the overall integration of the newly merged districts with other areas which are in the interest of the province, people, country, nation and the whole region. The resources flowing to the province would be spent strictly in these areas and the public welfare and developmental activities.

The Chief Minister said that a good governance model bringing transparency and based on merit would resolve the people’s problems adding that the public sector institutions have already been extended to these areas. Mahmood Khan made it clear that the people of the merged districts would be treated as par with the people of other areas of the country. Whatever the system and facilities existed in other areas would be expended to the newly merged districts, he assured.

The Chief Minister was optimistic that the government decisions for the integration and bringing the people of the merged districts to the national stream of development would bring along farreaching results.

Mahmood Khan said that this region was fast becoming the hub of economic activities in the wake of CPEC, generating employment, trade and economic activities that will lead to the stability of the economy. We would encourage the private sector in these areas and the 10 years development plan would change the destiny of the people of the erstwhile FATA.

The Chief Minister reaffirmed his stated commitment that the PTI would ensure installing a just system of governance, ensuring transparency and enabling the people to stand on their own feet.