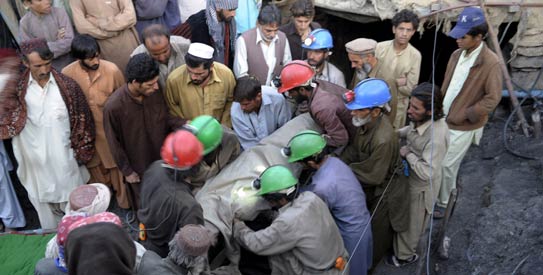 DARRA ADAMKHEL: Four workers lost their lives and another sustained injuries in a coalmine blast in Darra Adamkhel on Wednesday.

According to initial information from local sources, the incident happened in Nankala Khel area when the coalminers were busy in work. Poisonous gas accumulated in the coalmine which caused the explosion.

The other labourers at the coalmine brought out the bodies and the injured labourers. The deceased labourers belong to Shangla district.

Several incidents of coalmine explosions have occurred in Khyber Pakhtunkhwa, Balochistan and other parts of the country recently which have claimed several lives, but still the required safety measures at these mines have not been taken. And most of the times the victim coalmine workers hail from Shangla.

On 2 January, four workers lost their lives and another sustained injuries in an explosion in a coalmine in Chamalang area of Dukki district in Balochistan.

On 28 December, three labourers died and three others fainted when a coalmine collapsed in Dukki. The coalmine workers were fetching coal from a depth of thousands of feet when suddenly the mine collapsed, leaving the miners trapped inside. On 25 November, 2018, three labourers died and two fell unconscious due to accumulation of poisonous gas in a coalmine in Dukki. Earlier, a labourer also died in a similar incident in Dukki in August.

In October, at least 14 coal miners died in three separate incidents in different coal mines in Khyber Pakhtunkhwa. Two of these incidents had happed in Darra Adamkhel and now within a span of six months another tragedy has happened in the same area.

Pakistan Central Mines Labour Federation says about 100 to 200 labourers lose their lives or get injured in coal mine accidents across the country every year. The coalmine labourers work under extremely difficult and dangerous circumstances and always run the risk of being trapped into a mine due to its collapse or accumulation of poisonous gas. Despite numerous such incidents no proper measures have been taken for safety of the coalmine workers. However, in some instances, the coalmine owners claim that they provide safety equipment to the labourers, but the miners don’t use the equipment which often cause accidents.