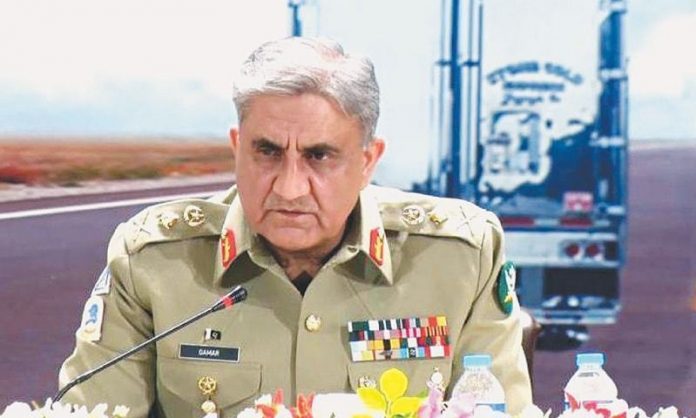 PESHAWAR: Chief of Army Staff (COAS) Chief General Qamar Javed Bajwa has said that national security has a deep connection with the domestic economy. He was addressing a seminar on ‘Interplay of economy and security’ held in Rawalpindi, said a statement issued by the Inter-Service Public relation (ISPR).

The statement said that the meeting of stakeholders was also held which was attended by the government economic team and businessmen of the country. The statement said that the COAS informed the participants of the country’s internal security situation and stressed that better coordination in the public and private sector has a positive impact on the domestic economy.

The Army Chief said that as the security situation in the country has improved, it would have a positive impact on economic activities. The ISPR statement said that the purpose of the seminar was to get stakeholders on a platform and get suggestions on how to move forward.  General Bajwa said that accessibility and responsiveness of government economic team to the business community and displayed understanding between public and private institutions is a good sign for the intended positive trajectory in economic activity.

Businessmen shared suggestions with the government team to further improve the environment for ease of doing businesses and assured that they will cooperate in the implementation of government reforms and also play their part by paying taxes and investing in a socially and economically responsible manner. COAS thanked all participants for purposeful utilization of the joint forum by stakeholders for discussions and seminars leading to the formulation of policy recommendations for subsequent processes and implementation.

According to ISPR, the government’s economic team apprised the businessmen of the steps taken to facilitate business and said that as part of efforts to stabilize the national economy. Traders shared tips for further improving the business environment and assured that they would support the government in implementing reforms, pay taxes and would invest to play their role in bringing economic prosperity in the country.