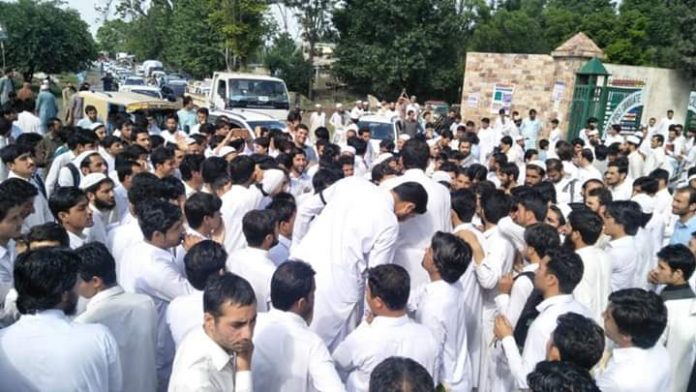 PESHAWAR: Students of Bajaur post-graduate college demanded the government to restore the college library and transport service for the students. The students were gathered outside the postgraduate college in Bajaur and chanted slogans against the administration.

They maintained that every month, the college administration charges them transport fee but they are not being provided transport service. The protesting students blocked Bajaur to Peshawar road for all type of traffic and remained on the road for a long time.

The students also raised the issue of massive electricity load-shedding in the college, which they said, has made their lives miserable. The students expressed that in the absence of electricity, it will be difficult to study in the scorching heat of summer. Therefore, they demanded the KP government and college administration provide them with an uninterrupted supply of electricity.

They have warned that they will further extend their protest if their demands were not fulfilled by the provincial government and college administration.

KHAR: Doctors at district headquarters hospital observed strike against the government plan of granting financial and administrative autonomy to the district level hospitals in Khyber Pakhtunkhwa (KP). All facilities at the hospital including general OPD remained closed during the strike held on the call of Bajaur Doctors Association.

They also held a protest outside the hospital. They chanted slogans against the provincial government and health department for the proposed reforms for the district level hospitals, which they believe is ‘injustice’ with doctors and patients.