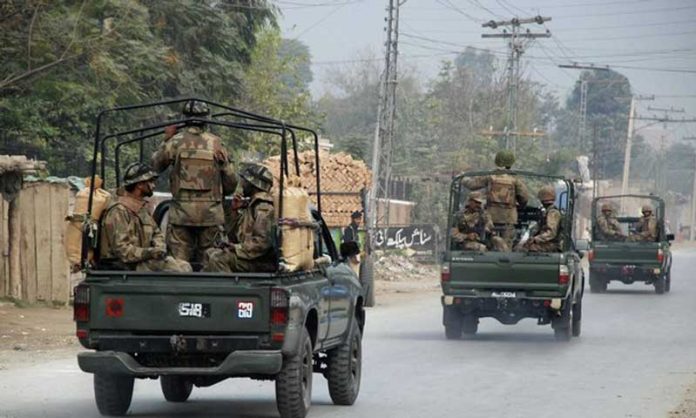 HANGU: Four militants, including a commander, were killed in a security operation in Hangu late on Tuesday night, security sources said on Wednesday.

The security forces conducted a raid near Qazi pump area in Hangu, where the terrorists were hiding in a house. The militant commander who was killed in the intelligence based operation was identified as Islam, who was involved in a number of militant attacks including the deadly suicide bombing of a market in Kalaya last year. The other militants were identified as Shahid, Laiq and Mohibullah.

Sources said the militant commander who was killed during the operation was affiliated with the Tehreek-e-Taliban Pakistan (TTP).

In another IBO, the security forces nabbed an Afghan national in Chaman area of Balochistan and recovered suicide jackets and arms from his possession.

According to the Inter-Services Public Relations (ISPR), the security forces foiled a terror bid in Balochistan and arrested an Afghan national along with suicide jackets and other ammunition on Tuesday. Acting on a tip off, the Frontier Corps (FC) Balochistan conducted an IBO on a suspected terrorist hideout in Chaman area. An unregistered Afghan individual was apprehended along with prepared suicide jackets, IEDs making material and communication equipment.

The security forces conduct intelligence-based operations from time to time to thwart militant attacks and plots. Most of the recent IBOs have been carried out in the tribal districts and Balochistan.

The ISPR said that on 11 January, the security forces killed two terrorists in an IBOs in Balochistan. The IBOs were conducted on suspected terrorist hideouts in the areas of Kalat, Kharan and Maiwand as part of the on-going operation Raddul Fassad by the FC. Weapons and ammunition including sub-machine guns (SMGs), improvised explosives devices, mines, rocket-propelled grenades (RPGs) and communication equipment were also recovered.

On 4 January, two IBOs were conducted by the security forces in North Waziristan tribal district and Balochistan.

According to the ISPR, the security forces conducted an IBO on a suspected terrorist hideout in Barkelay village in North Waziristan’s Spinwam area. The forces recovered improvised explosive device making literature, hand grenades and communication equipment. One terrorist was killed during the operation.

Separately, Frontier Corps conducted an IBO in the suburbs of Qila Saifullah and Kahan and foiled terrorist activities aimed to sabotage peace in Balochistan. Arms and ammunition were also recovered during the operation.