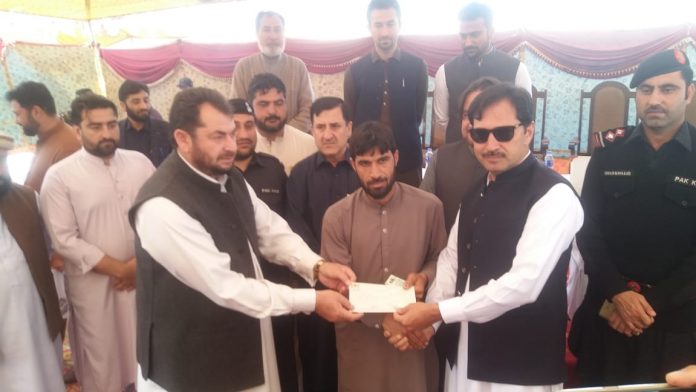 BARA: Compensation cheques worth Rs280.8 million were distributed among the families affected by militancy and terrorism in Khyber tribal district on Thursday.

A ceremony in this regard was organised at the Levies Centre in Shahkas which was attended by Member National Assembly from Khyber district Iqbal Afridi, Deputy Commissioner Mehmood Aslam and Colonel Ishtiaq from TDPs (temporarily displaced persons) Secretariat. On the occasion, cheques worth Rs280.8 million were distributed among 1,179 affected families from Bara and Tirah areas.

During militancy and military operations, 381 houses in Tirah and Bara were completely damaged, while 798 were damaged partially. The owners of completely damaged houses were given Rs400,000 each, while the owners of partially damaged houses got Rs160,000 each. The affected families include 259 from Akakhel, 303 each from Storikhel and Malikdinkhel, 74 from Bar Kambarkhel, 81 from Kamarkhel, 155 from Zakhakhel and three from Shalobar.

A total amount of Rs2.53 billion has been distributed among 8,269 people affected by terrorism in Khyber tribal district so far.

Iqbal Afridi said during the cheque distribution ceremony at Shahkas Levies Centre that the Pakistan Tehreek-e-Insaf (PTI) is now in power in the Centre and Khyber Pakhtunkhwa and all the decisions are being made purely on merit basis. He said the government is committed to provide justice and all facilities of life to every citizen at the door steps.

The PTI MNA said he will make efforts for inclusion of the people from the tribal districts affected by terrorism in the prime minister’s 5 million housing scheme.

To a question, Iqbal Afridi said he fully realises the fact that the amount of Rs400,000 for completely damaged houses and Rs160,000 for partially damaged houses is not enough, but still he is very thankful to the concerned authorities for releasing this amount. He said the people affected due to militancy will at least rebuild portions of their damaged houses with this amount and will move towards normalcy.

The tribal lawmaker said compensation will be paid to each and every person affected by terrorism.

The people who received compensation cheques thanked the government for helping them. They said their difficulties will reduce considerably with rebuilding of their damaged houses.