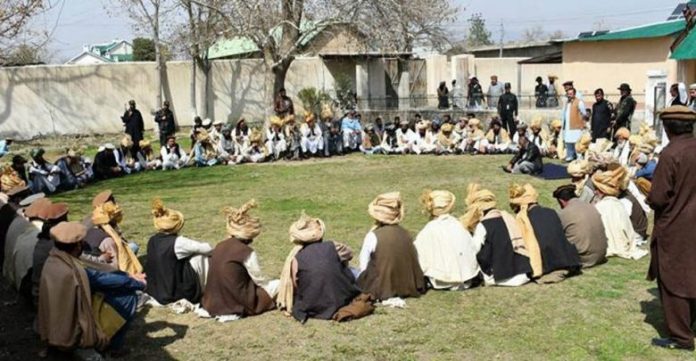 PESHAWAR: The establishment of reconciliatory Jirgas in merged tribal districts by the Khyber Pakhtunkhwa government has triggered a new debate on its legal status and viability as these bodies are similar to the old Jirga system with no representation for women or youth.

The Dispute Resolution Council (DRC) model of KP has been extended to merged districts to reduce burden on courts and resolve small-level disputes through Jirgas. Under this system, Jirgas comprising neutral elders are set up at police station level. To further strengthen the system, the KP government has introduced an amendment to KP Local Government Act 2013 to set up Jirgas at tehsil level under the Alternate Dispute Resolution (ADR) laws.

How a Jirga is formed under ADR?

The DRCs, which will be formed under the KP Local Government Act, will comprise up to 40 members. Thirty members in each council will be taken from concerned tribes after scrutiny and 10 members will be included from the district administration. In civil cases, the assistant commissioners will pick three or four members from the committee in which choice of the parties to dispute will not be considered.

Lacunae in the new Jirga system

Farhad Afridi, a lawyer at the Peshawar High Court, said although ADR Jirgas are legal, but these are set up in merged districts under an illegal procedure because the assistant commissioner and deputy commissioner have also been given judicial powers. He said the Supreme Court of Pakistan has already ordered that no government official can monitor a Jirga for resolving local disputes. These orders were issued by the apex court while nullifying Interim Governance Regulation in merged districts.

Farhad Afridi told TNN that giving judicial powers to administrative officers is violation of the Supreme Court orders. He said keeping a separate status for merged districts after merger with KP is beyond comprehension. He said bureaucracy was ruling the roost in the old system and now they are colluding again to bring back the old system. He said that under the ADR rules, parties to dispute have right to challenge Jirga decision in court, but in merged districts this appeal will be filed with bureaucracy officers who will be the final authority to decide appeals.

After amendments to Local Government Act 2013 on December 26, 2019, the concerned assistant commissioners took oath from the ADR Jirga members in Mohamed and Khyber districts. Under the law, 30 members of each committee are local tribal elders, while 10 members are included from the district administration. It has been emerged that most of the members of the Jirgas in Mohmand and Khyber are the same who used to be members of FCR-era Jirgas. 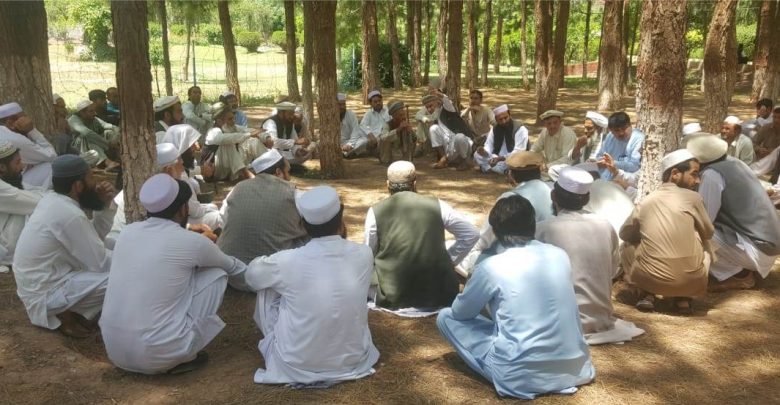 Jamrud Assistant Commissioner Jawad admitted that most people in the Jirga are the same who used to be members of previous Jirgas.

Questions are being raised by some quarters over integrity and social status of some Jirga members. Shah Sawar Mohmand, a local PPP leader, said most members of Jirgas are selected by local lawmakers or administration officers. He said the anti-merger elements are thriving again and they are giving an impression that the merger has failed.

No women and youth in Jirgas

All the Jirgas formed in merged districts so far have no place for women or youth. Tribal Youth Movement President Khial Zaman Orakzai said unlike reconciliatory Jirgas of settled districts, the Jirgas of merged districts have no representation for women or youth. He said the decision-making powers are being given to the same people again who always remained in power one way or the other. He said the tribal youth will raise voice over this injustice at every forum.

Dr Naureen Naseer, a Professor at University of Peshawar, said Jirgas having no representation for women have no legal or moral standing. She believes that these kinds of Jirgas will soon be nullified by courts.

Farhad Afridi Advocate said that under the ADR rules, at least one woman must be included in every Jirga.

The lawyers, youth and social activists have united in the opposition of the ADR rule and reconciliatory committees and they have already announced a movement against it.