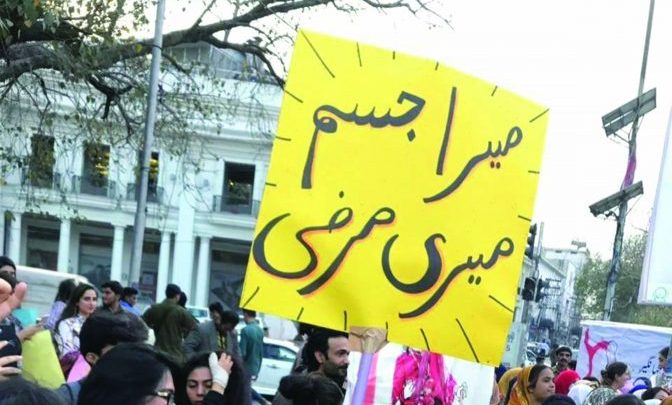 Men and even women are clearly divided over the slogan, with the opposing women terming this slogan as a symbol of obscenity.

“People have mainly misinterpreted this slogan as it is the slogan of victims of rape and early marriages,” said Shahida Shah, who works at the Human Rights Ministry in Khyber Pakhtunkhwa.

She said while talking to TNN that the slogan was developed to protect the rights of women, stop the practice of early marriages and they must not be pushed to the trap of death before their birth,” she said.

Shahida Shah said the basic aim of the Aurat March is to empower them to raise their voice for their rights which are given to them by Islam. She said people are generally in the habit of usurping the rights of women and Aurat March will give them courage not to step back from their right. She said there is no harm on discussion on different slogans on the social media, but the Aurat March is purely a women’s issue and men have nothing to do with it.

Woman journalist Zeenat Khan, who is running a campaign in favour of Aurat March on the social media, said while talking to TNN that people misinterpret the slogan, but its initiator wanted to convey the message that only a woman has the right to decide her future. No one has the right to harass a woman or tease her and get near to her without her consent.

“Every woman has the right to participate in the women’s march. They are just demanding their rights and they are not harming anyone. I don’t understand why some people are linking Aurat March with obscenity. Have we given all rights to women guaranteed by Islam,” she questioned.

She said Islam has given maximum rights to women and they must not cross the limits set by the religion. She said if the Aurat March is provoking women to cross these boundaries, then she would oppose it.

Jemima Afridi, a student from Khyber district, said Aurat March is a tribute to those women who are continuing their hard work despite so many difficulties.

Shandana Aziz from Mardan is also against controversial slogans and prefers to stay within the limits. She said the body has been given by Almighty Allah and it should be used according to the commands of the Almighty.