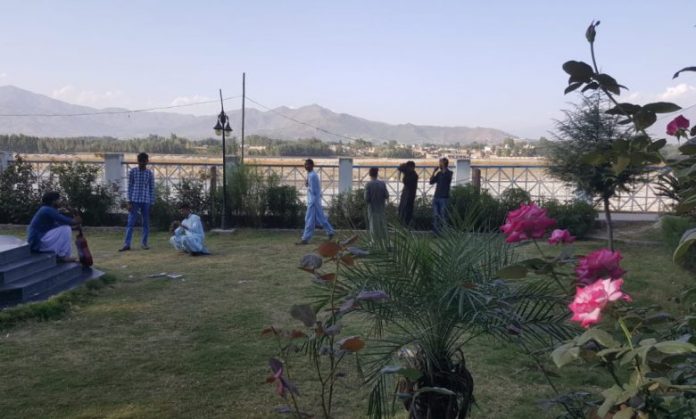 SWAT: Tens of thousands of tourists come to Swat every year to enjoy its scenic beauty. Tourism sector was also closed during coronavirus lockdown, but after improvement in the situation, a large number of tourists are again visiting the beautiful valley.

A tourist hailing from Charsadda, Faiza, who had arrived in Swat first time after lockdown, looked very joyous. She said she used to tour Swat in June-July every year, but this year she got late due to lockdown.

“We were getting bored at home so we came here and now we are enjoying every single moment here at this picturesque valley,” Faiza said while talking to TNN.

The famous Fizagat Park near Mingora also remains full of tourists these days. Boys in groups can be seen coming to the park and taking pictures in lovely weather. A boy from the group, Bilal, who hails from Bajaur, said he thoroughly enjoyed the scenic beauty of Swat. He said the weather of Swat is colder as compared to nearby districts. He said he and his other two friends plan to spend a week in Swat to enjoy the tourist places. He said his group are planning to visit every single tourist place in Swat.

Tour guides working at Mingora Tourist Information Centre are seen happy nowadays after resumption of tourist activities. Akbar Ali, a tourist guide, told TNN that recent flood affected three villages, but the media showed it as if the whole Swat is damaged, which affected the plans of tourists. He said some irresponsible media outlets showed the footages of the massive 2010 floods in Swat recently which created panic and tourists left the area. He said no big damages occurred, but media reports showed as if the whole district has been destroyed. He said there is no truth in such reports as Swat is fully vibrant. Everyone will benefit if tourism gets boost in Swat.

Eighty percent economy of Swat is directly or indirectly linked with tourism. Swat Hotel Association president Al-Haaj Zahid Khan told TNN that tourism sector in Swat suffered damages of Rs9 billion and 25,000 people lost their jobs due to lockdown this year. However, he said, revival or tourism has put things on right track.