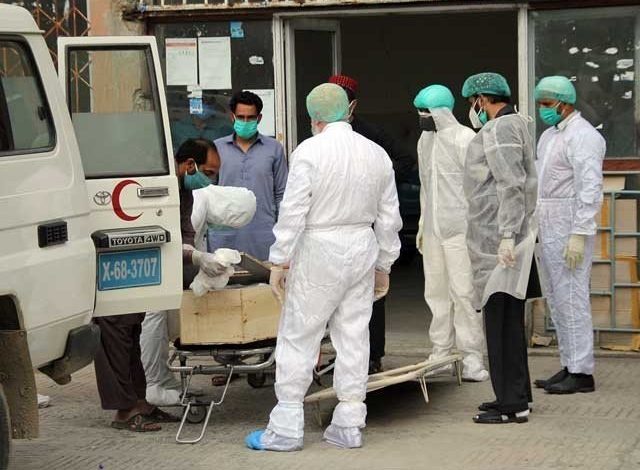 PESHAWAR: The fourth wave of coronavirus in Pakistan seems to be touching its peak as active corona cases in Pakistan crossed 90,000 mark on Tuesday.

According to latest data from the National Command and Operation Centre (NCOC), there are as many as 91,046 active corona cases in Pakistan as 4,075 new cases of the virus were detected during the last 24 hours.

Last time, the highest peak of corona cases in Pakistan was witnessed on April 29 when 91,547 people were diagnosed with the infection.

On Monday, 59,943 tests were conducted and 4,075 of them were tested positive for the infection. The coronavirus positivity rate on Tuesday stood at 6.79 percent.

On Monday, 91 people died of coronavirus in Pakistan, taking the total death toll to 25,094. The total infection count has increased to 1,131,659 while total recoveries were recorded at 1,015,519. As many as 2,857 people recovered from the disease during the past 24 hours. The recovery rate stands at 89.7 percent.

The number of critical corona patients in Pakistan on Tuesday stood at 5,513 with an addition of 123 patients during the last 24 hours.

Khyber Pakhtunkhwa reported 573 new infections during the last 24 hours, taking the tally to 157,721. KP also confirmed 22 more deaths from the infection, raising its death toll to 4,819.

Balochistan reported 20 more coronavirus cases, taking the total infections to 31,865, while the death toll rose to 336 after one more death. Islamabad reported 381 cases, Azad Jammu and Kashmir reported 119 cases and five deaths, while Gilgit-Baltistan reported 31 cases during the last 24 hours.

Meanwhile, Punjab reported 1,488 cases in the last 24 hours, the highest in over three months. Punjab also reported 48 coronavirus deaths over the past 24 hours. The total number of infections has now increased to 382,332, while the death toll from the disease now stands at 11,605 in the largest province of Pakistan.