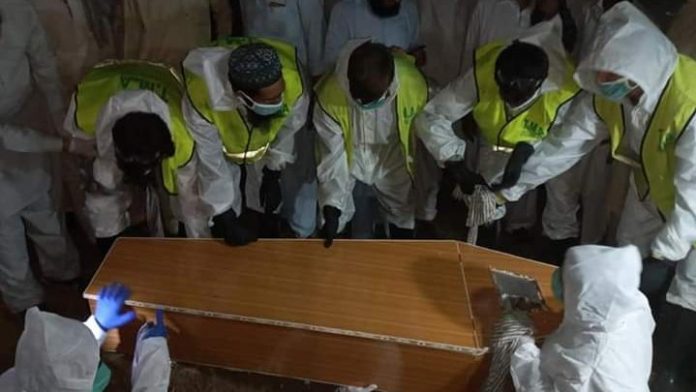 PESHAWAR: The death toll from COVID-19 in Khyber Pakhtunkhwa has reached 318 as 13 new deaths were reported on Sunday.

According to the latest data shared by the KP Health Department, as many as 214 new cases were confirmed in the province during the last 24 hours, taking the tally to 6,061. The new infections include nine from people returning from abroad who have been kept at different quarantine centres. Out of 13 new deaths, eight have been reported in Peshawar, two in Swat, and one each in Kohat, Karak and Swabi.

The Health Department said a total of 1,783 patients have recovered in KP including 84 during the last 24 hours. Active cases are 3,960.

KP maintains the grim milestone of most deaths from the pandemic in the country.

‘Mysterious’ death of youth in Nowshera

A young man died in Nowshera due to alleged negligence of doctors.

Afsar Bahadur Khattak, a local leader of the PTI in Nowshera, told media that his brother Haroonur Rasheed died due to negligence of doctors at Qazi Medical Complex.

Afsar said his brother had chest infection and fever few days ago, but the doctors did not admit him in isolation ward for coronavirus patients and kept on assuring the family that Haroon is alright and he can be taken home the next day when the test result of coronavirus is received. However, he said, at 10:00, the family members received a phone call from the hospital that Haroon is dead.

Afsar claimed that the coronavirus test of his brother was negative, but still he was laid to rest under the standard operating procedures (SOPs) at 2:00am in presence of few people. He demanded the prime minister, KP chief minister and chief justice of Peshawar High Court to order an inquiry commission to unearth circumstances in which his brother died.

Death toll from COVID-19 in Pakistan has mounted to 903.

As many as 318 deaths have been reported in KP, 260 in Punjab, 268 in Sindh, 36 in Balochistan, four in Gilgit-Baltistan, seven in Islamabad Capital Territory and one in Azad Kashmir.

The total confirmed cases of COVID-19 in Pakistan have mounted to 41,927.

As many as 11,341 patients have recovered from the virus in Pakistan.