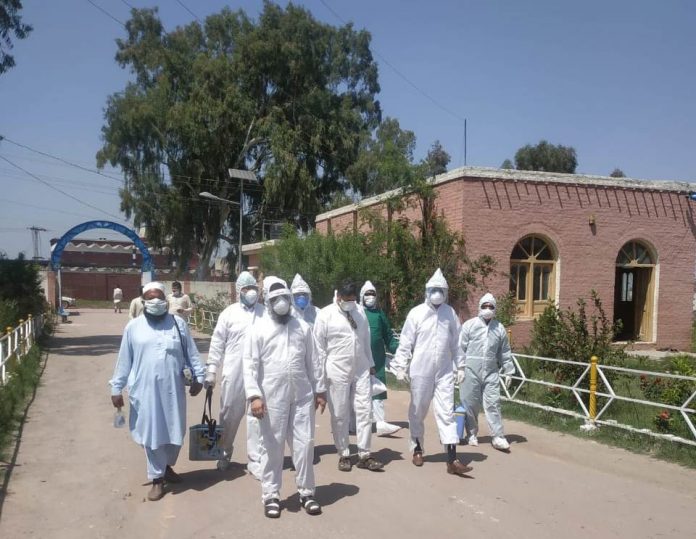 PESHAWAR: Naazir Afridi was one of the many parents in Khyber Pakhtunkhwa who have been refusing to vaccinate their children against the poliovirus due to the doubts in their minds about the vaccine.

His perception about the virus, however, changed with the outbreak of the coronavirus disease when he realized that a virus could be so dangerous that it might claim human lives.

“I had many misconceptions about the polio drops which are being given to children for many years. Earlier, I didn’t believe in any virus. But when I saw that people are dying of a virus (Covid-19), I realized that I might be wrong,” Naazir says while talking to TNN inside a local health facility in Landikotal tehsil of district Khyber, where he had brought his three-year old daughter to administer her anti-polio vaccine since she was left unvaccinated during the door-to-door immunization drive.

“I am feeling guilty that I didn’t vaccinate my children in the past. At the same time, I feel lucky that none of my children have been affected by the poliovirus despite that they have not been immunized,” he continues.

Pakistan is one of the three countries where the poliovirus could not be completely eradicated. It is one of the major health problems that can lead to paralysis, limb deformities, breathing problems, or even death. The Pakistani government has been vigorously and regularly running anti-polio drives in the country but the outbreak of the coronavirus disease has also affected the immunization campaigns. The anti-polio vaccination drive remained suspended for about four months following a rise in the cases of coronavirus disease. However, the government has resumed the immunization drive with strict SOPs.

Dr. Imtiaz, the district coordinator of the polio program in Mardan says that the number of polio cases has reduced significantly following improvement in the law and order situation in Khyber Pakhtunkhwa particularly the tribal areas. However, recently, the anti-polio drive remained suspended for about four months due to the coronavirus pandemic and I fear the number of polio cases may rise again in the coming days, he adds. “We are facing two challenges simultaneously; the corona and polio. The former may claim lives but the latter will cripple our future,” Dr. Imtiaz remarks.

He informs that keeping in mind the gravity of the situation, the government decided to resume immunization drives in the country while following corona SOPs. “We have successfully completed three drives in August, September and November. Had we further delayed the vaccination, the virus could have spread as it still exists in our country,” he continues.

“The credit of holding successful anti-polio campaigns goes to the health workers. It was really a tough task to vaccinate children while following corona SOPs. The health workers were given special training for the purpose,” he concludes.

Jasim Khan, who supervises the immunization drive in the Shamozai area of district Mardan, says that he and other polio workers were strictly directed to follow the corona SOPs while administering polio vaccine drops to children.

“We adopted strict precautionary measures during the drive. We used to wash our hands with soap after visiting every second home. Our foremost concern was that we did not touch the kids while giving them the vaccine and marking their fingers,” he narrates.

“There were two possibilities. We feared that we might not interact with a corona-positive person during the drive. The parents were also worried that we, the health workers, might not bring the virus to their families as we used to roam in streets and go from door to door,” Jasim explains why the precautionary measures were important for them.

Officials say that there is no plan to suspend the immunization drive during the second wave of the corona pandemic as the health workers supervising the drive have been fully trained about the SOPs.

Apart from the anti-polio drive, the coronavirus pandemic has also impacted the routine vaccination of the newborns as parents were unable to vaccinate their children due to the lockdown. The government had discontinued services at the small health facilities including the basic and rural health units besides there was also a ban on public transport in the city.

Jan Zeba, a resident of Safaid Sang, a rural suburb in Peshawar, says she could not complete the immunization of her eight-month baby due to the lockdown. She says that the health center is about 17 kilometers away from her home and she could not find any means of transportation to visit the health facility, as a result, her child could not be vaccinated in time.

“The second wave of coronavirus is getting deadlier with each passing day. I fear that if the government imposes another lockdown, my baby’s vaccination will be affected again,” she fears.

According to an official of the health department, the routine immunization process was halted due to the coronavirus pandemic. The official says that during the lockdown, about seven hundred thousand children could not be vaccinated for different diseases.

Many other parents preferred to stay home and avoided visiting health centers to immunize their children due to fear of coronavirus infection. Imaan, a resident of the Mardan district says she didn’t visit the hospital to vaccinate her child as there were corona-positive patients in the hospital and we feared that it might be unsafe for us.

Director of the Expanded Program on Immunization (EPI), Muhammad Saleem admits that the immunization program has been affected by the coronavirus pandemic. He, however, says complete arrangements have been made to continue the program in the future.

“We have done all the homework. We have asked all the technicians to regularly follow the corona SOPs, wear facemasks and use sanitizers frequently so that everyone remains safe and protected,” he informs. He reveals that the pandemic also impacted health workers financially as a large number of daily wagers, whose livelihood was dependent on immunization programs, had lost their jobs.

Shabnam, who hails from district Hangu, is one of the many health workers who lost their jobs during the lockdown. She has been performing duties in the immunization program for the last many years and earning a livelihood for herself.

“Everything was going smoothly. I was getting a good salary which was enough for my treatment and other household needs. All of the sudden the coronavirus pandemic came in and deprived me of my job,” Shabnam tells TNN.

“I am shattered as I have no other means to manage my expenses. I cannot do any other job. I wonder how I would continue my treatment and manage other expenses,” a desperate Shabnam laments.