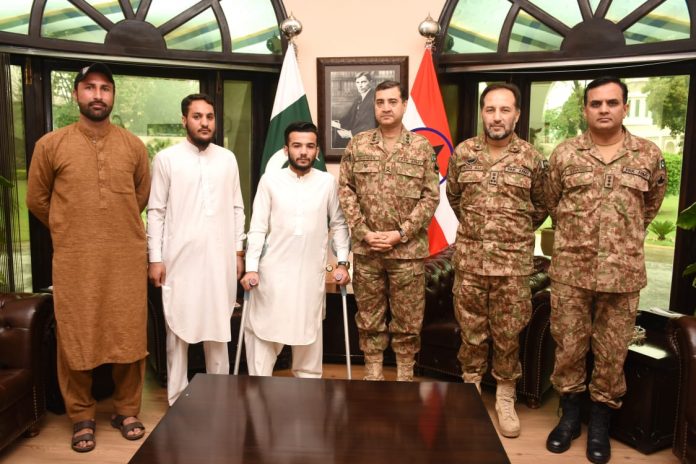 PESHAWAR: A delegation of ‘FATA Disables Welfare Organization’ on Wednesday held meeting with corps commander, Peshawar Lieutenant General Shaheen Mazhar Mehmood and informed him about the issues faced by people with disabilities of the tribal areas of Khyber Pakhtunkhwa.

The president of the organization, Irfan Ullah Khan was leading the delegation of people with disabilities. During the meeting, they discussed issues relating to health, Education and welfare of people affected due to wars and now passing lives with a different type of disabilities.

The corps commander announced Rs 1 million for the welfare of the people with disabilities in tribal districts. The corps commander also ensured them ten per cent quota for children of people with disabilities in the Army public schools in the province. The top army official also promised that an office for the FATA Disables Welfare Organization’ will also be set in the provincial capital.

The corps commander also ensured the delegation he would also talk to the chief of army staff regarding the free treatment of people, who were rendered disabled due to the war on terror in the tribal belt in the combined military hospitals (CMH). The corps commander also said that proper steps will be taken to provide free of cost artificial lambs to people with disabilities in tribal districts of the province.

After the meeting, Irfan Ullah Khan said that they are thankful to the Corps Commander and the Pakistan army for such generous support. Khan said that such support to the people with disabilities shows that Pakistan army is serious in bringing a real change and prosperity in the tribal districts.

Special Persons Organisation has asked the government to set up a skill centre, issue them monthly stipends and increase job quota for disabled people in government departments. Despite promises with special persons of the tribal district, the government has not fulfilled any promise so far.