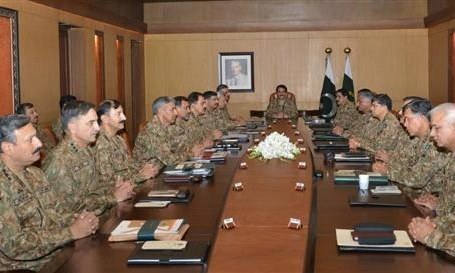 According to the Inter-Services Public Relations (ISPR), the meeting held at General Headquarters in Rawalpindi also discussed progress in the ongoing Operation Zarb-e-Azb against terrorists.

The army chief said during the meeting that operation will continue against terrorists in tribal areas. He said terrorist hideouts will also be eliminated from the settled areas of the country.

General Raheel said the operation against criminals in the country is apolitical and its aim is to bring peace. He said the Pakistan Army will ensure people’s safety at any cost.

The Corps Commanders moot took strong notice of RAW’s assistance with terrorist elements in Pakistan. It was noted in the meeting that RAW is fuelling terror activities in Pakistan.