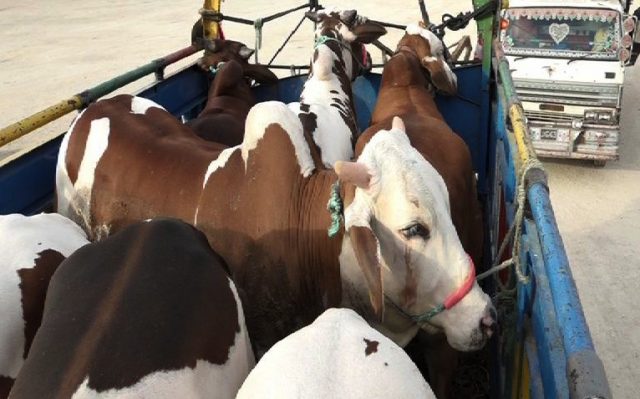 PESHAWAR: The Peshawar High Court on Wednesday directed KP Government to keep a strict check on the illegal export of sacrificial animals to Afghanistan ahead of Eidul Azha.

The order was issued by a two-judge bench comprising justice Abdul Shakoor and Justice Muhammad Ibrahim while hearing a petition filed by Ashfaq Ullah Khan through his lawyer Yasir Khattak asking for courts’ direction to the government to take strict action in this regard.

“The illegal export of sacrificial animals is creating artificial inflation on the occasion of Eid,” the lawyer for the petition Yasir Khattak argued before the bench. The lawyer added that a huge number of animals are being shifted to Afghanistan due to which the poor people in the country are unable to offer the animals sacrifice on Eid. He alleged the Khyber Pakhtunkhwa government has so far not taken any step to stop this practice therefore; he has to file a petition in the court of justice for strict directions to the concern authorities.

From the KP government side, additional advocates general Syed Sikandar Shah appeared before the bench. The court after hearing the argument the bench has issued a direction to the federal and provincial government to submit a response in the case and inform the court what efforts are being taken to stop the illegal export of sacrificial animals to Afghanistan.

PESHAWAR: The Federal Board Revenue (FBR) on Wednesday imposed a fine of Rs 25000 on Khyber Pakhtunkhwa bar council for not providing details of registered lawyers in the province.

A notification issued in this regard by the FBR said that the fine was imposed for failure to submit any response to the request made by the FBR seeking the data of registered lawyers in the province.

The lawyer’s body was, however, given an opportunity to appear and explain why the notice was ignored and no data was provided to the FBR.