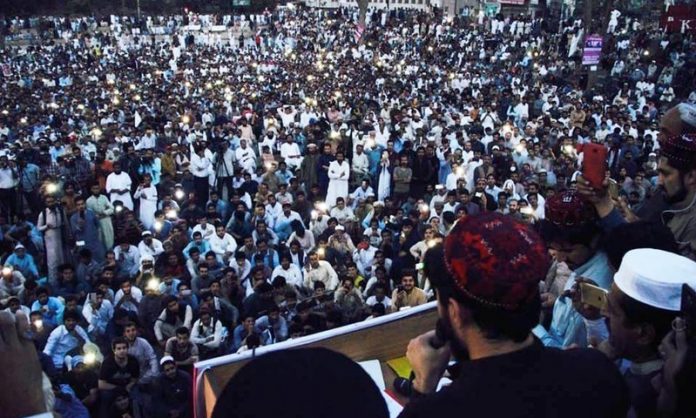 PESHAWAR: The Peshawar High Court (PHC) on Thursday ordered the withdrawal of FIR registered against the Pakhtun Tahafuz Movement (PTM) leadership after their gathering in Swabi.

The court was informed that the FIRs were registered against the PTM leadership after the Jalsa in Swabi district, which they said was a peaceful gathering. But the Swabi district administration registered FIR against Manzoor Pashteen, Mohsin Dawar, Ali Wazir, Gulalai Ismail and Dr Mushtaq. The lawyer argued before the bench that holding peaceful public gatherings is the right of every citizen of the country.

The petitioners added that they have not done any illegal; therefore, registering FIR against them is totally unjustified. Thus, they asked that court to withdraw the FIRs against the PTM leadership.

Additional Advocate General (AAG) Waqar Ahmad opposed the arguments and said that the PTM leadership are involved in anti-state institutions slogans due to which the police have to register cases against them. Ahmad added that they (PTM) have leadership have lured the public on sedition through speeches and slogans.

After hearing the arguments, the PHC bench has ordered to drop the FIR launched against them at Swabi police station.

A few days back, a Peshawar High Court bench has ordered the interior ministry to remove the name of a woman social activist Sana Ijaz, another PTM activist from the Exit Control List and allowed her to travel abroad. Sana Ijaz was ordered to furnish two surety bonds of Rs5 million each to the satisfaction of the court.

It pertinent to mention here, before this, FIRs have also been registered against the PTM leadership in Bannu, Karachi, North Waziristan and Dera Ismail Khan.