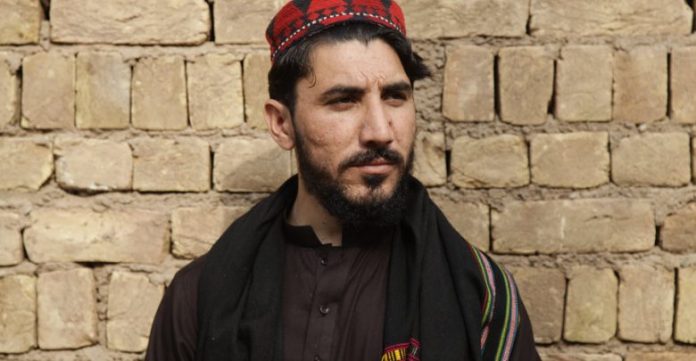 District and Sessions Judge Muhammad Younis accepted the request of DI Khan Police for shifting the PTM chief to DI Khan, where a first information report (FIR) has been registered against him. The PTM chief was not presented in the court during Tuesday’s proceedings and he was represented by his lawyers Shahab Khattak, Farhad Afridi and Fazal Advocate.

During the proceedings, Manzoor Pashteen’s lawyer requested the court to grant transit bail to his client, which the court denied.

It is expected that the PTM chief will be produced before judicial magistrate for remand after his shifting to DI Khan. Manzoor Pashteen was arrested from Shaheen Town in Peshawar on Monday. A case was filed in DI Khan against the PTM chief on January 18 under sections 506 (punishment for criminal intimidation), 153-A (promoting enmity between different groups), 120-B (punishment of criminal conspiracy), 124 (sedition), and 123-A (condemning the creation of the country and advocating the abolishment of its sovereignty) of the Pakistan Penal Code. According to the FIR, Manzoor Pashteen addressed a rally in DI Khan on January 18 in which he used defamatory words against the country’s constitution and state institutions.

Besides Pashteen, nine other PTM activists have also been arrested by police. The PTM leaders including Members of National Assembly Ali Wazir and Mohsin Dawar along with other PTM workers held a press conference in Islamabad to announce countrywide strike against the arrest of Manzoor Pashteen.

Meanwhile, Pakistan has cautioned Afghan president Ashraf Ghani to abstain from interfering in internal affairs of Pakistan. Mr Ghani in a statement had expressed concern over arrest of the PTM chief.