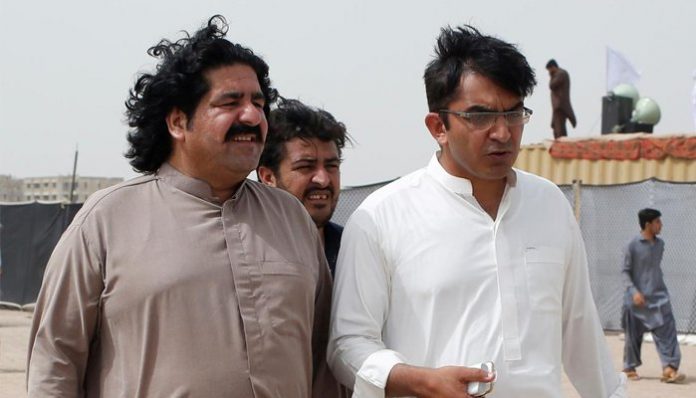 PESHAWAR: The Peshawar High Court (PHC) on Monday rejected the plea of Ali Wazir and Mohsin Dawar asking for the transfer of their bail applications from Bannu Anti-Terrorism Court (ATC) to Peshawar.

The PHC Chief Justice Waqar Ahmad Seth heard the plea of Pakhtun Tahaffuz Movement (PTM) leaders filed through senior lawyer Abdul Latif Afridi. The court was informed that both the leaders are imprisoned in Peshawar prison but whenever there is hearing, they have travel for hundreds of miles to Bannu ATC court due to which they are not only faced with extra trouble but also waste precious time of court and security forces.

When the hearing began, Khyber-Pakhtunkhwa (KP) Advocate General Shumail Ahmed Butt appeared before the bench and requested to dismiss the case as both MNAs are the residents of Waziristan and under the law, the area falls under the jurisdiction of Bannu ATC court. Shumail Ahmad Butt added that only Bannu court will hear their case, until something extraordinary happens, such as deteriorating law and order situation.

After the arguments, the court rejected the application and said that the Bannu ATC court will continue hearing their case.

On August 17, An Anti-Terrorism Court (ATC) accepted bail applications of Members National Assembly Ali Wazir and Mohsin Dawar in a case pertaining attack on security forces however their bail was rejected in Khar Kamar tragedy.

After which their lawyers told media that they will now file bail applications for both the Pakhtun Tahaffuz Movement leaders (PTM), in Khar Kamar tragedy, in the Peshawar High Court and expressed the hope that the court will grant them bail without further delay.