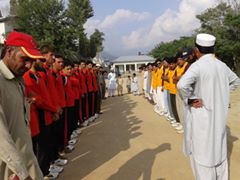 Our correspondent says that in inaugural match at Gamser cricket ground, the Naseem Eleven club beat and Sultankhel Eleven. Sultan Khel team scored 133 runs in specified 15 overs while batting first. The Naseem Eleven chased down the target in last over at loss of two wickets. A total of 15 teams from all over the district are participating in the tournament.