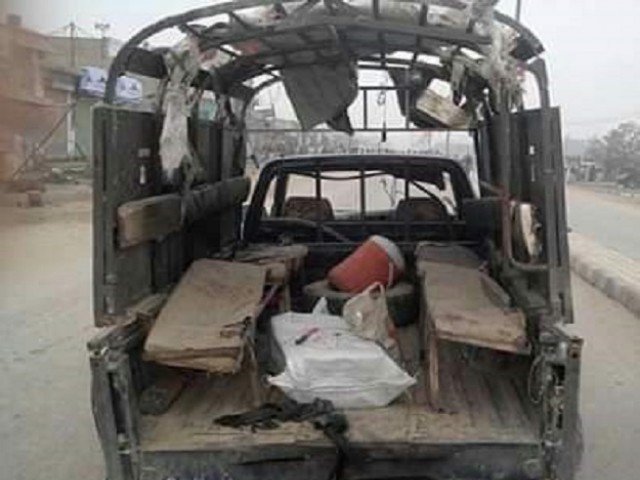 DERA ISMAIL KHAN: The Counter Terrorism Department police on Wednesday registered a case against unknown terrorists in the attack on a police van in Maharah area of DI Khan’s Parwa sub-district in which four police officials including SHO embraced martyrdom.

The suspected terrorists targeted and ambushed a police van patrolling in the area. According to police the FIR includes sections of terrorism, murder, attempt murder and use of explosive material.

According to police, the mobile party led by SHO Parwa Police Station Tahir Nawaz was on routine patrolling when unidentified armed assailants riding motorcycles and a double cab pickup sprayed bullets on the party, not letting them retaliate instantly. The attackers made their escape after leaving the police personnel lying in pool blood near Mahra sub-town.

The injured officials were rushed to District Hospital Dera Ismail Khan in a precarious condition but they succumbed to injuries.

‘Police School of Intelligence, a source of pride’

ABBOTTABAD: Member KP Assembly of Pakistan Tehrik-e-Insaf at Khyber Pakhtunkhwa Assembly Arshad Ayub Khan on Wednesday praised the role of Police School of Intelligence (PSI) in enhancing the capabilities of the force and said that it is a source of pride for the province.

He said this while addressing the certificate distribution ceremony of officers here. Arshad Ayub said that sacrifices of KP police are exemplary, capacity building of the police force is the need of the time, our enemy agencies are also operating in Pakistan and to tackle them intelligence is a must.

He said that after the training of intelligence school its feedback is important when you will work hard with commitment then you will also raise the flag of your department. Arshad Ayub maintained that KP police department’s performance has improved and institutions like Police School of Intelligence also brought positive change in the department.