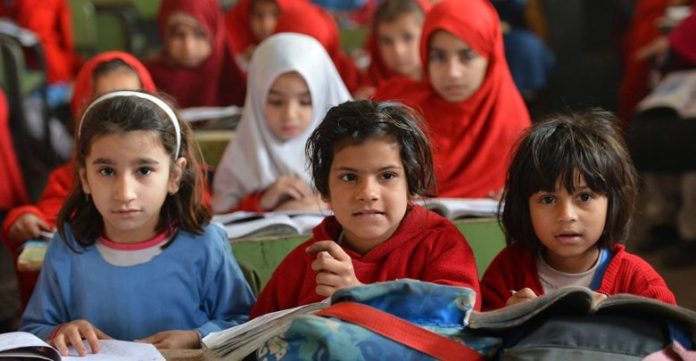 LANDIKOTAL: Everyday, girls are quitting their dreams in Khyber because of the educational environment and fewer resources.

At present, the enrolment of girls at private primary schools stands at 3,826 (3.97 percent) and boys 23,698 (22.67 percent) in Khyber district, which shows that it is not easy for every girl to get enrolled in private schools. On the other hand, in government primary schools, the enrolment of girls was recorded at 41,026 (42.61 percent) against boys at 40,578, (38.82 percent), according to Education Department data.

Unfortunately, most of girls start their education in private schools in the aforementioned area and mostly in a co-education environment, but later on, their parents usually enroll them either in government girls schools or their education is discontinued further.

“I was 11 years old at the time when I was in grade-4 and I was studying in a private school located in Landikotal where boys and girls were sitting under the same ceiling, but my parents decided to shift me to a government girls’ school,” Shama, a girl from Khyber district, told TNN.

Shama said that the quality of education is better at private educational institutions, but ironically, with the girls just getting into their puberty stage, their parents suddenly decide either to migrate them to the government girls schools or they are made to sit at their homes just because of the locals norms.

Also, it is worth mentioning that the quality of education at government schools is not up to mark as compared to private schools and the students are compelled by their teachers to carry out their domestic chores.

Asma, who has also gone through such a situation, narrates her story in these words: “I used to go to the government school till grade-3 but then I informed my parents that I won’t go to the school because our teachers forced us to do their domestic work and later I had to finish my own domestic chores as well which was quite hard for me to manage and this is the reason I had to say goodbye to my education.”

Asma added that she never wanted to quit her education as she always wanted to be a doctor, but the situation forced her to leave education. She also tried to convince her parents for private schooling, but they didn’t agree with her because of the cultural and social norms as well as the financial restraints. She said that leaving education like that way was one of the biggest challenge for her and she had to do a compromise on her dreams as she was not seeing any future there, because they did not teach a single word but rather they exploited the students.

According to the educational authorities, there are 348 girls schools in Khyber district. In the majority schools, there is a shortcoming of female teaching staff. In most areas, there aren’t any female teachers’ hostels due to which teachers don’t perform their duties. In some areas like Tirah and Bara, there aren’t even basic facilities like water, furniture, and buildings. Many girls quit education because of the large distance. Moreover, the government has decided to appoint local females for teaching but the eligibility criteria are so high that most of the local seats go vacant.

On the other hand, the government is trying to assign local female teachers staff to fill the gap. The government is also working to ensure basic facilities in girls schools.

Asma further added, “We couldn’t even complain. I still remember one of my friends complained against our school to a supervisor. After that, she was beaten badly in front of the whole class so that other students may not dare highlight the issues again to the higher authorities. I then realized that it is useless to continue my study because it’s of no use to me and thus I had to quit my dreams.”

There isn’t any proper system or department for complaints, but sometimes supervisors visit different schools for checking the school condition.

Shama’s father said that he shifted his daughter to a nearby government girls school as it is deemed inappropriate to make girls sit with boys in a tribal culture when they start growing up.

The mother of Shama also pointed out the economic issues that impede parents’ efforts to get their children a quality education. She said that she has seven children and the family cannot afford to enroll all of them in private schools.

Contrary to the primary-level enrolment, the enrolment of girls in government middle schools in Khyber district stands at 2,492, (4.63 percent) and boys 8,858 (15.14 percent). The same level of girls’ enrolment in private schools is 35 (0.06 percent) and boys 10,447 (17.86 percent), which shows a massive decline of enrolment from primary to middle level.

Professor Dr Naser Ahmad, an educationist, said that education has become a source of big earning for educationists rather than a mission. In a tribal culture, he said, the burden of looking after a family rests on a man, therefore, investment is made in boys to make them successful citizens of the society. He added that investment in girls’ education is very low and they are allowed to join only a few fields like education and health. However, it is the responsibility of the state to educate every person. He said that no society can make a solid and real development without educating their women.