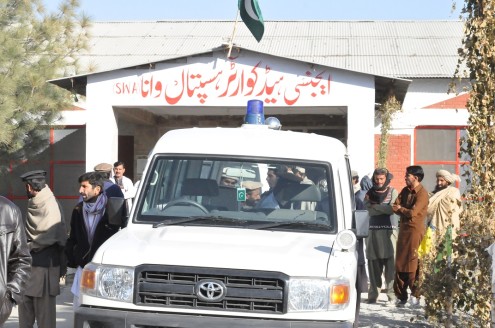 WANA: At least two activists of the Pashtun Tahafuz Movement were killed and over dozen others wounded in clashes between peace committee and PTM in Wana tehsil of South Waziristan agency’s on Sunday afternoon.

Addressing a press conference in Rawalpindi, Director General of Inter-Services Public Relations (ISPR) Maj Gen Asif Ghafoor said that exchange of fire took place in Wana after the former was constantly raising anti-army and anti-state slogans which infuriated the peace committee members.  He denied that any child was killed in the clash as being propagated on social media.

He said that the peace committee members had given numerous sacrifices alongside Army to clear Wana from terrorists.  He said that PTM is being exploited by anti-state elements to malign Pakistan and its armed forces.

Meanwhile local sources said that PTM activists led by Ali Wazir were going to hold a rally when some armed men opened fire on them. As a result, two workers of PTM were killed and more than a dozen injured. However Ali Wazir was safe in the firing.

They said that the activists of PTM were unarmed and were responding to the fire by peace committee members with stones.

The injured were shifted to different hospitals in South Waziristan and DI Khan by locals and military helicopters.

Major General Asif Ghafoor said that army deployed in Wana intervened and made ceasefire and his claim can be verified from PTM that who took injured to combined military hospitals in DI Khan?He said this was army that shifted injured in military helicopters to medical facilities in DI Khan.

Following the attack, the angry activists of PTM torched two offices of the attackers. Some people call the attackers as Taliban while others say they were members of Peace committee. Consequently political administration imposed curfew in the area to control the situation.

The officials of local administration say that a Jirga comprising local elders has been convened today for holding talks with the two sides. After the news spread on social media, the enraged followers of PTM took to roads in different cities of Pakistan to condemn attack on Ali Wazir and PTM rally.