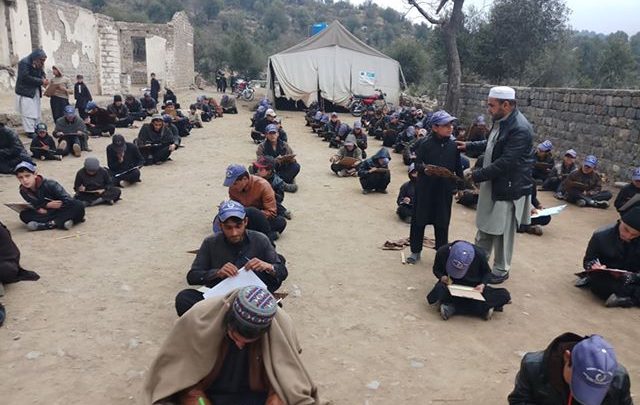 ORAKZAI: A school in Kasha area of Orakzai district that was demolished by militants in 2009 but still awaits the Khyber Pakhtunkhwa education department for reconstruction.

For the last three years, students are studying under the open sky without even the basic facilities and whenever there is an inclement weather condition, the students used to set in a nearby mosque.

Students from the nearby villages including Ibrahimo, Totyano Mela and Khawrai also come here for study because there is no other school available within 5 kilometres area. There are 220 students studying in the school where nine teachers have been employed to teach them.

While talking to TNN 3rd grade student, Zaland Orakzai said that from 2009 to 2016, the process of education was completely stopped after their school was demolished through a blast. During this time, security forces have also launched operations against militants due to which they have to vacate the area. Zaland added that whenever there is rain, they used to set in a mosque situated some 5 km away from the school as there is no other alternative available.

Local people said that they have also registered a complaint at the Prime Minister complain cell but have not received any response. The KP government has issued tender for the construction of the primary school last year but so far they have not seen the contractor.

The village elders said that the government has assured that the middle section of the school will be included in the next financial year’s plan but they expressed that they are not expecting anything positive from the government.

The elders said that as for as the girl’s school is concerned, there was one middle school that was also demolished by militants. They added that they have made some temporary arrangements but there is only one female teacher, who is also not regularly attending the school duty.

Students and elders of Orakzai’s Kasha area have requested the PTI government to fulfil their demand and establish schools for boys and girls in their areas so that like other parts of the country, their children can also get a proper education.