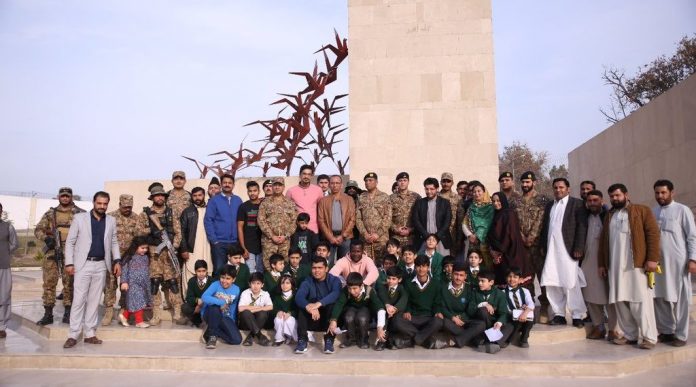 PESHAWAR: The crowd favourite Peshawar Zalmi captain Darren Sammy arrived in Peshawar on Monday to promote his team and meet his fans.

The Zalmi skipper will attend his team’s kit and anthem inauguration ahead of the fourth season of Pakistan Super League (PSL), which will kick off on 14 February and will continue till 17 March.

“The moment has finally arrived. I am elated to announce that Daren Sammy has landed in Islamabad and is on his way to meet all the Zalmi Fans in Peshawar. His excitement can be seen as he steps foot in the city of flowers for the very first time,” tweeted Peshawar Zalmi owner Javed Afridi soon after arrival of Sammy.

The moment has finally arrived. I am elated to announce that @darensammy88 has landed in Islamabad & is on his to meet all the #ZalmiFans in Peshawar. His excitement can be seen as he steps foot in the city of flowers for the very first time. ⚡ #PakhairRaghlaySammy pic.twitter.com/wjZBvVix3o

Darren Sammy was also visited the Army Public School in Peshawar and met the students and took selfies with them. Kamran Akmal also accompanied Sammy.

The presence of skipper @darensammy88 brought joy to the students of APS & there were smiles all around it. @PeshawarZalmi is proud to have such amazing fans & we always look for ways to return back the love. I hope to see most of you at the #ZalmiKitAnthem Ceremony later today. pic.twitter.com/oN0YYwDmPp

About 150 people, mostly students, were martyred in a terrorist attack on the Army Public School in 2014. Sammy will be there to express solidarity with the families of the martyred students.

Sammy is with the Peshawar Zalmi team since the first season of the PSL and became a fan favourite due to his unique style of playing and lively character. He was the first main foreign player who agreed to play in Pakistan. Pakistan former captain Shahid Khan Afridi and Zalmi owner Javed Afridi played important role in convincing Sammy and some other foreign players to play in Pakistan. Sammy’s gesture further increased his fan following in Pakistan, particularly in Khyber Pakhtunkhwa.

Javed Afridi said Gul Panra will also be a part of women empowerment activities led by the Zalmi Foundation.

In an earlier interview, Javed Afridi said the time is not far when all the matches of the PSL will be hosted in Pakistan. The fourth edition of the mega event will start on 14 February and conclude on 17 March. The initial matches of the PSL-4 will be held in Dubai, Sharjah and Abu Dhabi in the UAE leg, after which the Lahore and Karachi will host the last eight matches.

Javed Afridi said his team aims to promote a softer image of Pakistan and bring international cricket back to the country.