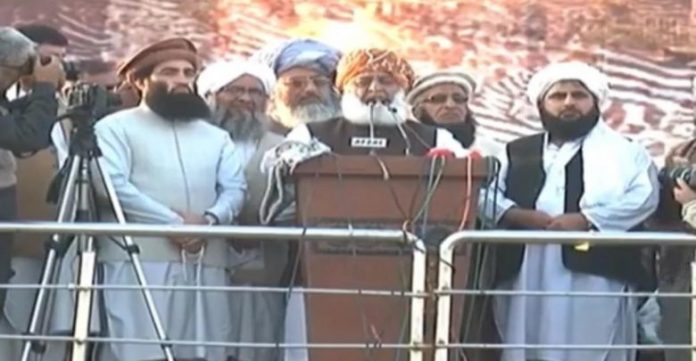 PESHAWAR: Maulana Fazlur Rehman, head of Jamiat Ulema-e-Islam (F) has said that days of Pakistan Tehrik-e-Insaf (PTI) government days are numbered as the opposition parties are gearing up to throw it out of power.

He alleged that PTI has been imposed on the masses through ‘rigged elections’ which they will never accept.

Addressing a large gathering in Peshawar today, Maulana Fazl said that the policies of the ‘illegitimate’ rulers have made lives of poor people of the country worse and has created massive employment of youth in the country.

In his address, he said that JUIF and allies don’t accept a government which has occupied the country through ‘illegal’ means and the JUIF will not set in peace until the end of this government.

The central JUIF chief also said that the proponents of accountability for others are now escaping the accountability process and are now filing cases in the courts to avoid accountability. He accused the government of massive corruption in Billion tree tsunami project and alleged that though they claim of planting 1 billion trees, in reality, the number is limited to just 20 million. The promised the gathering that the government and its cronies will be made accountable for all the corruption done in the uplift projects in the province.

Maulana Fazlur Rehman strongly criticized the BRT project and said that because of this project the lives of the people of Peshawar have been in a miserable condition. He added that the project has the cost of over one billion rupees. The JUIF chief said the cost of 1 kilometre BRT is 1.50 billion, making it one of the costly metro projects of the country.

Lastly, Maulana Fazlur Rehman claimed that the party is now approaching its destination and now his movement against the government will not go back but will send the government of PTI back to homes.

The JUIF on November 27 has launched a long march against the government which was ended after 15 days of protest in Islamabad, however, made it clear the JUIF will not set in peace until the country get rid of PTI government.