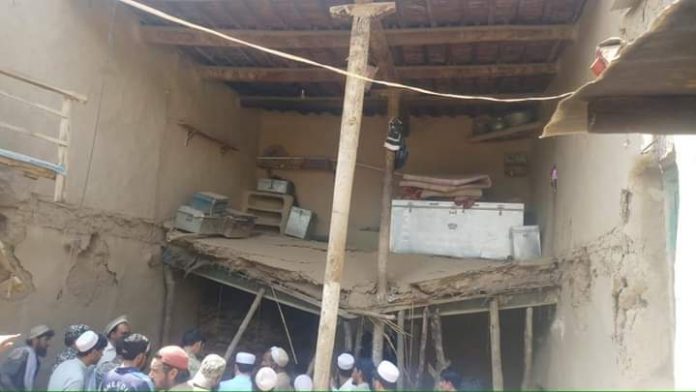 UPPER ORAKZAI:  At least eight persons – including women and children – were died when the roof of a house collapsed here in Upper Orakazai on Thursday.

The incident has occurred in Larri Feroz Khel area of the district in the house of Yaqout Khan. Though not enough information about the roof collapse incident was reported to media, however, it was informed that a number of people, mostly women and children, were gathered on the occasion of a wedding when the dilapidated roof of veranda collapsed over their heads.

As a result, eight persons have lost their lives while some 47 sustained injuries. The local sources said that most of the victims of the tragedy are women and children. The local sources further informed that after the news of the incident spread in the village, hundreds of locals rushed to the spot for rescue operations. They have retrieved the trapped persons from under the debris and were shifted to the hospitals for medical treatment.

PESHAWAR: Rescue 1122 emergency services of the province have informed that due to heavy rains in the provincial capital, water has entered homes, damaging the boundary walls on Thursday morning. The rescue 122 said that in Badhabera, a number of mud-made boundary walls of houses also collapsed, however no loss of human life was reported.  The rescue 1122 workers used water pumps to remove water from houses.

Heavy Rains also lashed parts of Southern districts of the province including in Lakki Marwat and Kohat where though rains have ended the long spell of summer, however, water could be seen stranded in the streets creating problem in the free movement of local people.

Rains have lashed districts Kohat, where heavy rains have provided solace to the local people against the scorching heat of summer season. It was the first spell of moon soon rains that will continue from time to time during the ongoing month.