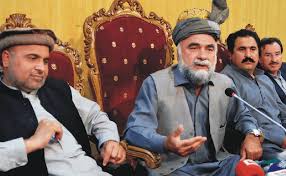 PESHAWAR, 22 November: The debate on reforms in the administrative system of FATA has concluded in the National Assembly and a report about it will be presented in the Senate soon.

The FATA parliamentarians said during the debate in the National Assembly on Monday that the tribal areas should be merged with Khyber Pakhtunkhwa. They said this is the right time for necessary reforms in FATA and the government should act in this regard before it is too late.

Sahibzada Tariqullah and Al-Haaj Shah Je Gul Afridi commended the report of the FATA Reforms Committee and demanded merger of FATA with KP without delay. They also thanked Prime Minister Nawaz Sharif for taking the initiative of reforms in FATA.

FATA Reforms Committee Chairman Sartaj Aziz while concluding the debate said the report was presented in the Parliament 9 September and debate was conducted on it in the Lower House. He said very good proposals were made by the members during the debate which will be presented in the Senate for debate during the next two weeks. After the Senate discussion, the bill will come to the National Assembly again.

Sartaj Aziz said the FATA region is in the state of war for the last 37 years and there is no justification of opposing the proposals for reforms in the tribal areas. He said implementation of the FATA Reforms Committee proposals will be ensured by 2018.