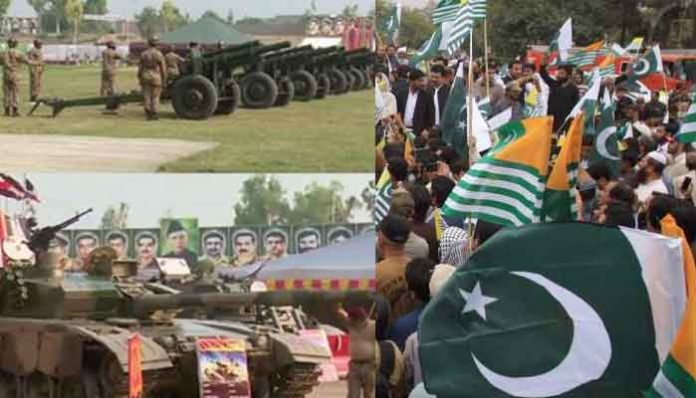 PESHAWAR: The nation is observing Defence and Martyrs Day and Kashmir Solidarity Day today (Friday) to pay tributes to the martyrs and ghazis and also to express solidarity with the people of Indian Held Kashmir (IHK) for their right to self-determination.

On September 06, 1965, the Indian troops crossed international border in the darkness of night to attack Pakistan, but the nation foiled it nefarious designs and defeated the aggressors. This year, the government has announced to observe the Defence and Martyrs Day as Kashmir Solidarity Day to reaffirm the support of Pakistani nation to the people of IHK who have been under lockdown for over a month now after revocation of special status of the valley by the Indian government despite severe criticism from international community.

The day dawned with 31-gun salute at the federal capital and 21-gun salute at provincial capitals. Special prayers were offered at mosques during Fajr for peace and prosperity in the country and independence of IHK. A special ceremony was held at Mazar-e-Iqbal in Lahore in the morning. A smartly turned out contingent of Pakistan Army presented guard of honour.

The main ceremony of the day will be held at the General Headquarters (GHQ) in Rawalpindi to pay tributes to the martyrs. The families of the martyrs have been invited to the ceremony.

On the Defence Day, people will also visit the families of the martyrs and pay tributes to them.

President Dr Arif Alvi in his message on the occasion of Defence Day said September 06 dawns every year with remembrance of national spirit and for renewal of resolve to lay down our lives for our beloved motherland.

“54 years ago, our valiant Armed Forces, standing shoulder-to-shoulder with the nation, immortalized this day as a symbol of courage, bravery, sacrifice and national integrity by thwarting the evil designs of the enemy. Inspired by those proud moments, we have successfully confronted various internal challenges and defeated external conspiracies and by imbibing us with the passion for self-sufficiency, September Spirit has made our independence and sovereignty invincible,” he said.

Prime Minister Imran Khan said in his message that September 06 stands out in the history of Pakistan as a symbol of enduring display of unity, indomitable courage and unmatched sacrifices by our gallant soldiers who, on this day, years ago, proved to the world that the country’s defence is unassailable and the valiant armed forces are ever ready to defend every inch of the motherland.

Our Shuhada and Ghazis are our heroes and the nation owes them gratitude and respect. I salute the gallant sons of soil who laid down their lives while defending Pakistan, and pay respect to their families for unparalleled sacrifices they rendered for our tomorrow,” he said.