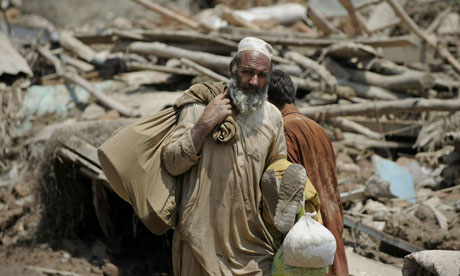 In the first phase of demolition yesterday, the district administration demolished empty houses and shops in the camp. People still residing in the camp have been asked to vacate their houses within 24 hours.

On the other hand, the Afghan refugees staged protest against demolishing the camp and blocked GT Road for all kinds of traffic for two hours. They said the Taliban have occupied their houses in Afghanistan and they have no shelter in their country.

Nowshera Additional Assistant Commissioner Tanveer Khan says the camp was closed in 2010 and the residents were issued several notices to shift to Akora Khattak, Khairabad and Shamshatoo camps. He said Afghan refugees had been illegally residing in Azakhel camp for the last five years.

The shifting of Afghan refugees is part of the Khyber Pakhtunkhwa government’s measures to limit their movement after the massacre of schoolchildren in Peshawar on 16 December, 2014.