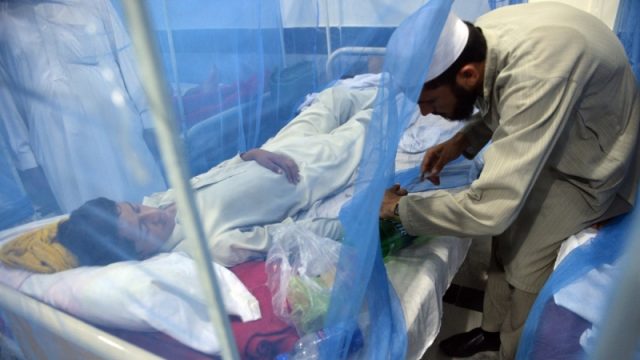 LOWER DIR: After the coronavirus pandemic, now dengue has reared its ugly head in Lower Dir as three persons were diagnosed with the disease on Thursday.

According to the district health department all the three dengue patients have a recent travel history. They have been admitted to the dengue ward of the District Headquarters Hospital Timergara.

Health authorities have advised the citizens to observe precautionary measures to avoid the spread of dengue fever.

Dengue was almost forgotten when coronavirus was on its peak in Pakistan and rest of the world. However, with effective steps by the government now coronavirus has been overcome to a great extent. However, the threat of both coronavirus and dengue virus still exists in case people do not observe precautionary measures.

Dengue, like the coronavirus, is a viral disease, but the infection is spread by a vector, a mosquito, which transmits the virus through its bite. Dengue is a tropical disease, and has grown in Pakistan beyond its East African habitat because of global warming.

The disease’s first outbreak in Pakistan was in 2011 when it killed around 300 people. Dengue fever outbreak happens every year as the mosquito carrying the disease has not been eradicated. The main standard operating procedures (SOPs) against dengue include removing of stagnant water and other things which can serve as breeding places for the mosquito, and anti-mosquito fumigation to eliminate the mosquito.

Punjab has again emerged as hotspot for the emergence of dengue disease as nearly 700 suspected cases have been reported so far. The threat of the spread of the disease in rest of the country, particularly in Khyber Pakhtunkhwa, remains as the disease usually spreads in Pakistan during the current season. Anti-dengue fumigation has been initiated in some parts of the country already as part of precautionary measures. Health experts are also urging the need of running an awareness campaign to create awareness among the people about precautionary measures.