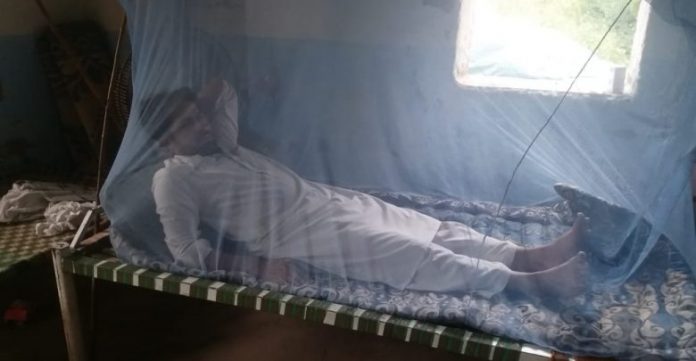 BARA: Dengue virus, which killed over 60 people in Khyber Pakhtunkhwa last year, has raised its ugly head again as one person has also been infected by the virus in Khyber tribal district.

TNN correspondent reported that dengue virus has been confirmed in a resident of Bara sub-division of Khyber tribal district after which the area people have become more careful about the spread of the disease. Local sources said 30-year-old Jehanzeb from Shalobar tribe has been diagnosed with dengue virus. The infected person is a brother of former councillor from Shalobar Asghar Khan and he runs business of mobile phone cards.

People of the area have called upon the government to take notice of the situation and take measures to prevent spread of the disease.

Last year dengue killed 65 people in KP and hundreds of others were affected.

With decrease in temperature the number of mosquitoes is increasing especially in areas with greenery and stagnant water. Stagnant water offers best breeding places for Aedes aegypti mosquito that transmit the viruses that cause dengue fever. According to media reports, dengue fever is spreading rapidly in the rural areas of Peshawar district where at least 1,200 cases have been confirmed. The spread rate of the fever is increasing to epidemic levels.

Lack of coordinated efforts by all the relevant departments, ignorance of the people and apathy of the government agencies even when the Health Department issued a timely advisory are the main reasons for the spread of the fever.

No measures have been seen by the government despite the fact that dengue caused havoc in the same season last year. The only thing done is that the hospitals have established separate dengue wards for patients who are already infected.

Sources said the health authorities are short of funds to meet the challenge. And as is the norm, authorities don’t move until the situation goes out of hand. No public awareness campaigns have been carried out to ward off the danger of the spread of dengue fever which is another source of concern. It seems that the authorities are inclined to brush the matter under the carpet.